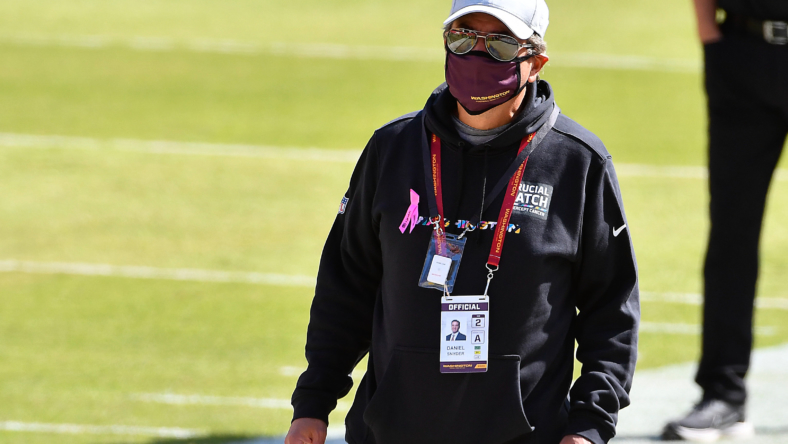 D.C. Attorney General Karl Racine held a press conference on Thursday with the Washington Commanders as the focus.

Racine’s office had announced earlier in the week that it was planning for a “major” announcement in its investigation into Daniel Snyder’s team following allegations of widespread financial wrongdoings and workplace misconduct.

In his announcement from D.C. on Thursday, Mr. Racine indicated that the city is filing a civil consumer protection lawsuit against Snyder, the Washington Commanders, the NFL and commissioner Roger Goodell “for colluding to deceive residents of the District of Columbia” regarding investigations into the team’s workplace.

To say that this qualifies as some stunning news would be an understatement. Remember, Snyder and the Commanders had been the topic of conversation within the federal government for allegations of widespread workplace misconduct on the part of the embattled owner and the NFL organization.

In its investigation, the house committee sent a letter to the Federal Trade Commission (FTC) alleging that the Commanders engaged in “a troubling, long-running and potentially unlawful pattern of financial conduct.” This included withholding ticket revenue from visiting teams as well as refundable ticket deposits from season-ticket holders.

This situation is much different in that the D.C. Attorney General’s Office had also been investigating the Commanders for the better part of the past calendar year.

“After public reporting revealed that sexual misconduct, harassment, and misogyny ran rampant for decades at the team, the defendants promised DC residents that the league was going to fix this toxic culture, including by fully cooperating with an independent investigation. That was all a lie,” statement from D.C. Attorney General Karl Racine on suing the Washington Commanders and the NFL.

“Instead, the NFL turned a blind eye to Snyder’s extensive efforts to silence or intimidate witnesses, and the NFL and Commanders entered into a secret agreement that gave Snyder power to veto the release of any results.”

This can’t be seen as a good thing for Snyder and the Commanders. It’s also yet another black eye for the NFL after the league received a ton of push back for its initial investigation into allegations of workplace misconduct within the Commanders’ organization.

As for the Commanders, they went on the defensive on Wednesday immediately after it became public record that a major announcement was coming. In Washington’s press release, the organization decided to deflect in a big way.

“Less than three months ago, a 23-year-old player on our team was shot multiple times, in broad daylight,” Washington Commanders statement read. “Despite out-of-control violent crime in DC, today the Washington Commanders learned for the first time on Twitter that the D.C. Attorney General will be holding a press conference to “make a major announcement” related to the organization tomorrow.”

As for Snyder, the embattled owner just recently announced an intention to sell the organization. Something could come to fruition on that end before the start of the 2023 NFL season. However, these investigations and this civil suit won’t go away simply because Snyder now wants out of dodge. The announcement from Thursday adds another layer to this.