Victor Oladipo didn’t appear in a game for the Miami Heat last season until March as he continued to rehab from a 2021 knee injury. When Oladipo finally got on the floor, he proved that he’s still a valuable rotation player. He made an impact on both ends of the floor, scoring off the dribble and holding his own, defensively.

The 30-year-old combo guard is an enticing short-term signing for any NBA contender. With more playing time and continued recovery, he can be an effective starter once again.

Victor Oladipo to the Phoenix Suns

The Suns may very well need a new center if Deandre Ayton bolts. If and when Phoenix loses the big man, they need to find crafty ways to enhance their rotation. Bringing in Oladipo qualifies as such a move.

The NBA is a guard-oriented league. Phoenix presumably committing to Devin Booker and a 37-year-old Chris Paul over Ayton perfectly epitomizes that reality. The Suns have several open roster spots. Oladipo checks a lot of boxes in terms of fitting their identity.

For starters, the Suns are an elite defensive team and Oladipo is a proven defender who forces turnovers. Oladipo’s knack for getting to the rim off the dribble gives head coach Monty Williams another scoring option who can handle the rock off the bench. Booker and Paul have recently experienced injuries in postseason play. Oladipo gives the Suns more guard depth while they focus on finding cost-effective ways to replace Ayton.

All that said, the Suns may opt to stick with Cameron Payne and Landry Shamet as their second-string backcourt, refraining from devoting a noteworthy salary to a player their rotation doesn’t need.

The Pelicans have a lot going for them, including a deep young nucleus and highly-productive veterans (Brandon Ingram and CJ McCollum). There’s one more piece missing from head coach Willie Green’s rotation for next season, that being a backup two-guard. Oladipo can fill that void.

The veteran is best suited to coming off the bench given the amount of time he has missed of late. Oladipo would serve as a veteran complement to a young but tantalizing bench corps (Jose Alvarado, Trey Murphy III, Herbert Jones, and Jaxson Hayes). He provides them with a versatile bench scorer who can start in a pinch.

The more, the merrier for the Pelicans in the scoring department, as Zion Williamson, whose return is vital to the team becoming a Western Conference contender, continues to encounter injury hiccups. One way or another, it’s a luxury to have a veteran scorer like Oladipo backing up McCollum.

The factor that could stop the Pelicans from signing Oladipo, though, is them preferring to stay in-house to fill out their rotation, moving Devonte Graham or Kira Lewis Jr. into an off-the-ball role.

Victor Oladipo to the Milwaukee Bucks

A season removed from winning the NBA Finals, the Bucks remain in the thick of Eastern Conference contention. At the same time, the East is deeper than it was a year ago and Khris Middleton is coming off a season-ending knee injury. Oladipo would be a savvy signing for the Bucks.

A team in Milwaukee’s position should never take depth for granted. They only have two high-level scorers and should therefore always be on the lookout for more scoring. Oladipo would assume a pivotal role off head coach Mike Budenholzer’s bench. In thought, Oladipo could be their backup point guard, as he’s capable of slowing the game down and getting others involved. 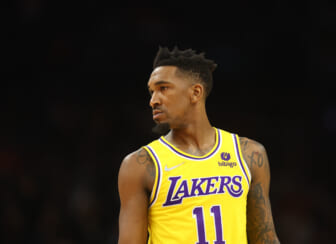 Outside of Bobby Portis, Milwaukee doesn’t have a player who provides a multi-faceted scoring threat (e.g. someone primarily being a spot-up shooter or slasher). Oladipo gives the Bucks a lift in that regard. If he flourishes in their system, Oladipo could end up on the floor at the end of games. This gives the Bucks more speed and another player who can create his own shot.

Worst-case scenario, Oladpo is ineffective and struggles to make an impact on the Bucks, resulting in the two parties moving on midseason. It’s an upside move with minimal risk.