East-leading Heat could get Victor Oladipo back vs. Rockets 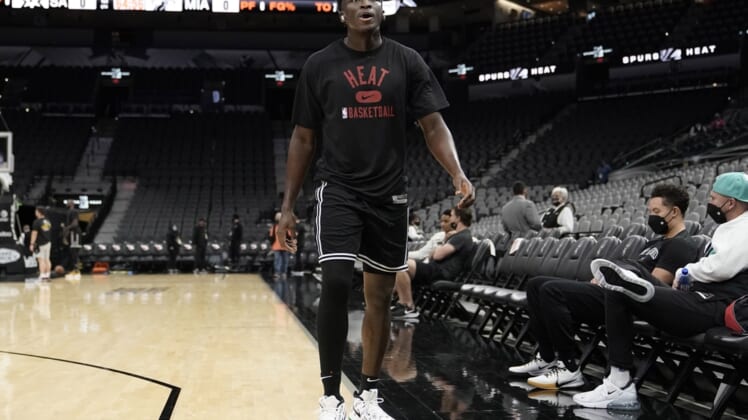 The Eastern Conference-leading Miami Heat will host the lowly Houston Rockets on Monday night in a game that has the makings of a monumental mismatch.

“It means a lot,” said Rockets rookie Jalen Green, who scored 24 points on Sunday. “It gives us confidence heading into Miami. We needed this one.”

It’s possible the Heat could take the Rockets lightly. Miami went 3-1 over the past week while playing against four championship contenders: the Chicago Bulls, Milwaukee Bucks, Brooklyn Nets and Philadelphia 76ers.

“The last four games have been good for us,” Heat guard Tyler Herro said.

Starting with Saturday’s win over the Sixers, the Heat are playing 11 out of 12 games at home. No team in the league has played fewer home games than the Heat, who have just five road contests left.

Miami’s main issue at the moment is the fact that assists leader Kyle Lowry has missed four straight games due to personal reasons. But Jimmy Butler has taken on a point forward role and leads Miami in scoring (21.4) and steals (1.8) while ranking second in assists (5.7).

The Heat could get even better on Monday. Victor Oladipo, who has a 17.5 career scoring average, could return to the lineup.

Oladipo, a two-time All-Star, hasn’t played since April 8 of last year following a second surgery on a right quadriceps tendon. He is listed as questionable for Monday.

Butler said he has also been impressed by Oladipo’s work ethic.

“He looks great,” Butler said. “He’s put in countless hours of rehab. I’m excited to get him back.”

Herro ranks second on the Heat in scoring (20.6). Center Bam Adebayo leads Miami in rebounds (10.3) and ranks third in scoring (18.9). Shooting guard Duncan Robinson, who is averaging 11.2 points, is No. 2 in Heat history in 3-pointers.

Meanwhile, Houston will try to keep the momentum from Sunday’s win over Memphis. In that game, Houston’s Kevin Porter Jr. scored a game-high 29 points, including 19 in the third quarter.

Christian Wood added 28 points and a game-high 13 rebounds for the Rockets. In his past three games, Wood is averaging 24.7 points and 10.7 rebounds.

Other than 33-year-old guard Eric Gordon, the Rockets’ current rotation is exceptionally young. Wood is in his prime at 26, but Porter — just 21 — is indicative of Houston’s youth.

Green, the second overall pick in last year’s NBA Draft, was a teenager until last month. He is averaging 21.7 points over his past four contests.

Dennis Schroder, who leads Houston with 7.5 assists, has missed three straight games due to a sprained right ankle injury. Schroder could return on Monday.