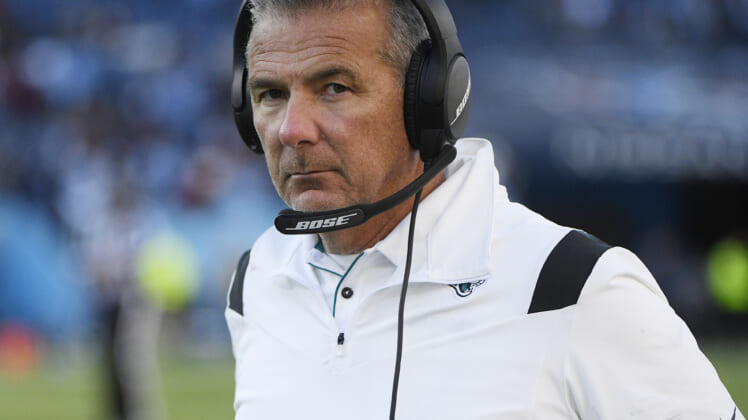 Former Jacksonville Jaguars head coach and college football legend Urban Meyer is reportedly on the verge of returning to television, reuniting with Fox Sports before the 2022 college football season.

Months after being fired with cause by the Jaguars for kicking a player and for his inappropriate behavior, the 57-year-old is seemingly set to walk back into the media world as a top analyst for Fox Sports’ college football coverage this fall.

According to Richard Deitsch of The Athletic, Meyer is in deep negotiations with Fox Sports on a new contract that will secure his return to the network.

“He is well-liked by top Fox Sports executives and the show found viewership success for the network, though they remain behind “College GameDay” in morning pregame college football viewership.”

Meyer previously worked for the network as one of its lead studio analysts as part of the “Big Noon Kickoff” program. It often aired before marquee Big Ten games, with Meyer still having ties to both Fox Sports and the conference.

There is now an opening on the show with former Oklahoma Sooners coach Bob Stoops leaving Fox Sports to work in the XFL next year.

As Deitsch notes, Meyer does have extensive experience on the television side. He worked with ESPN’s broadcasting team for 10 months in 2011 before returning to college football as the Ohio State head coach.

Fox Sports is fully aware of the numerous allegations against Meyer, including his verbal abuse of coaches he hired in the NFL and a former Buckeyes player detailing how poorly Meyer treated him. During his time in Jacksonville, Meyer lost the trust of the locker room after deceiving the players about a viral video showing him receiving a lap dance from a young woman at his restaurant following a loss on Thursday Night Football.

Despite the criticisms looming from social media, Fox Sports believes adding Meyer’s insight on college football and coaching will prove far more valuable than the backlash for his behavior as a coach.

While he will be welcomed back into television, the revelations from Meyer’s former players at both the professional and collegiate levels suggest he never coaches again. An NFL insider shared in December that he believes Meyer’s time coaching on the sidelines is over for good.