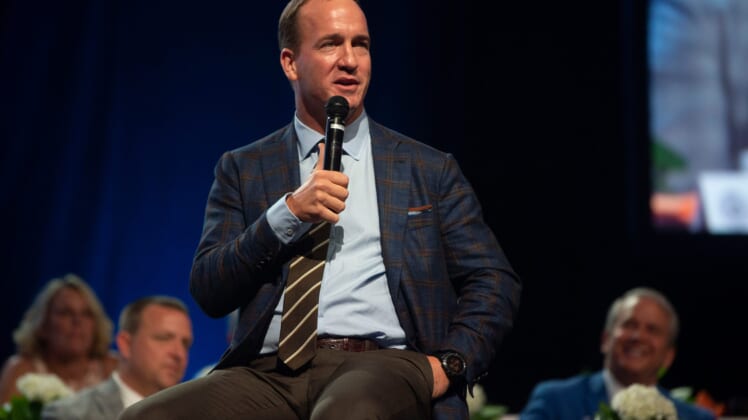 UFC 278 on Saturday night will not only feature a championship main event that includes pound-for-pound star Kamaru Usman, but the event’s coverage will also see the unique start to NFL legends Peyton Manning and Rob Gronkowski’s MMA media careers.

The UFC’s event on August 20 is a highly anticipated pay-per-view card that will air exclusively on the streaming service ESPN+. The show includes a welterweight title bout between Usman and top contender Leon Edwards. A grudge match featuring former middleweight champion Luke Rockhold and Paulo Costa. And a pivotal booking at the top of the UFC bantamweight rankings between MMA legend Jose Aldo and Merab Dvalishvili.

However, it seems that ESPN is expanding on their UFC coverage in a new and unexpected way that will include two of the NFL’s biggest stars over the last two decades.

On Friday it was announced that Omaha Productions, the company that Peyton Manning owns and that produces Monday Night Football’s “ManningCast” alternate commentary show will also be offering alternate commentary for UFC 278. However, unlike the “ManningCast” hosted by brothers and NFL greats Peyton and Eli Manning, the new “GronkCast” will be hosted by four-time All-Pro Rob Gronkowski and his family.

Gronkowski will reportedly host the show alongside brothers Chris, Dan, Glenn, Gordie Jr., and his father Gordon. During the podcast, team Gronkowski will have interviews with guests like UFC Hall-of-Famer, Chuck Liddell, and rising United Kingdom stars Paddy Pimblett and Molly McCann.

UFC 278 kicks off with preliminary action at 6 PM ET on ESPN+, followed by the core prelims at 8 PM ET on ESPN, and the PPV main card on the ESPN streaming service beginning at 10 PM ET.