Tyreek Hill: ‘Kansas City threw me to the side, like I was trash’ 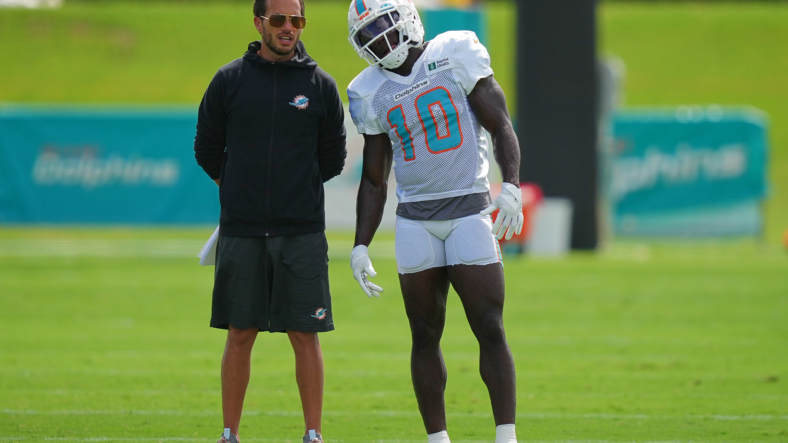 Compared to Davante Adams, who also switched teams this offseason, Tyreek Hill has consistently had his name in headlines since shockingly being traded from the Kansas City Chiefs to the Miami Dolphins back in March. Immediately upon being traded, Hill had already secured a new contract that made him one of football’s highest-paid receivers.

It appeared the contract was the sticking point for Kansas City. They weren’t willing to shell out a four-year, $120 million contract for the six-time Pro Bowl receiver. While business is business, Hill seems to feel bitter about how Kansas City moved on, despite calling his time with the Chiefs a great situation.

In speaking to Armando Salguero of Outkick, Hill shed more light on his departure from Kansas City after six seasons with the team.

The Miami Dolphins took several steps forward this offseason, giving first-year head coach Mike McDaniel a talented roster from top to bottom. We still don’t know about Tua Tagovailoa and whether he can live up to his draft status as the fifth overall pick in 2020. But this is the year of discovery for the Dolphins.

With Hill, Jaylen Waddle, and Mike Gesicki, Tagovailoa won’t have any excuses if he struggles. While there’s potential for catastrophic failure, there’s also a strong chance of the Dolphins returning to the playoffs for the first time since 2016. But that won’t be enough for Hill, he’s aiming even higher, and he sounds quite confident in their chances.

It’s great to hear Hill being so confident in Tagovailoa and his new team, but to even have a wildly successful season, they’ll have to overcome the two playoff teams who are already in their division. Many have the Buffalo Bills as Super Bowl favorites thanks to their consistent effort over the past few years.

Then there’s the New England Patriots who managed to snag a postseason seat, despite having a rookie QB in Mac Jones. Stock may be down in Boston, and it’s soaring in South Beach, but expecting to play in the Super Bowl might be a bit much. Still, he has the right mentality, every team should feel like they can go to the promised land, but actually getting there is an entirely different story.