Tom Brady passed for two touchdowns and Leonard Fournette rushed for two as the Tampa Bay Buccaneers notched a 28-22 victory over the host Philadelphia Eagles on Thursday night.

Brady didn’t appear to be hampered by his sore passing thumb as he completed 34 of 42 tosses for 297 yards. However, his franchise record of 227 passes without an interception came to an end when Philadelphia’s Anthony Harris picked him off late in the first half.

Jalen Hurts rushed for two touchdowns and passed for one for the Eagles (2-4), who lost for the fourth time in five games. Zach Ertz caught a touchdown pass and Alex Singleton racked up 15 tackles. 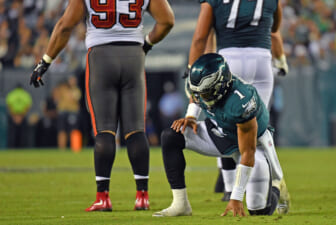 Hurts completed 12 of 26 passes for 115 yards and one interceptions. He also rushed for 44 yards.

Philadelphia had just 99 total yards through three quarters and finished with 213. The Buccaneers gained 399 yards and had 27 first downs to 16 for the Eagles.

Philadelphia moved within 28-22 as Hurts scored on a 1-yard run and followed with a two-point conversion pass to Quez Watkins with 5:54 left.

However, the Eagles never saw the ball again. Brady connected with Brown on a key 27-yard, third-down completion and he later got a first down on a third-down quarterback sneak, allowing the Buccaneers to run out the clock.

Tampa Bay scored on its first possession when Brady tossed a 2-yard touchdown pass to Howard.

The Eagles knotted the score on Hurts’ 5-yard pass to Ertz with 6:01 left in the opening quarter. Tampa Bay went back ahead when Brady connected with Brown on a 23-yard scoring pass with 33 seconds left in the first period.

Fournette scored on a 2-yard run with 1:56 left in the half as the Buccaneers took a 21-7 lead into the break.

Fournette scored from the 1 to make it a 21-point margin with 5:47 left in the third quarter. Hurts scrambled in from the 6 as the Eagles trimmed their deficit to 28-14 with 2:15 left in the stanza.