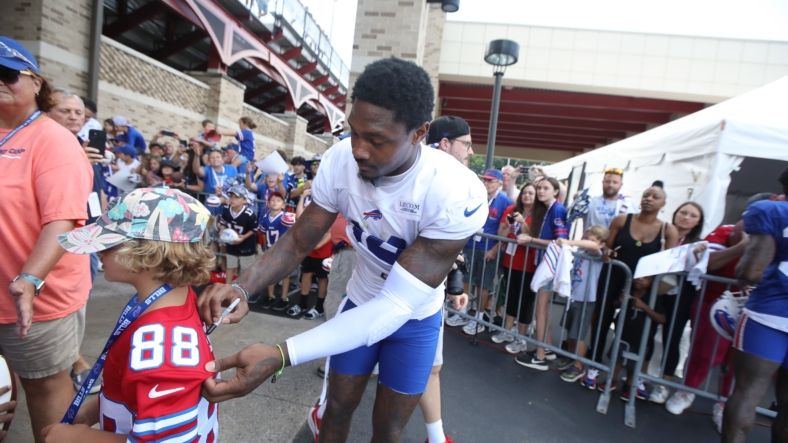 For Buffalo Bills wide receiver Stefon Diggs, it’s almost as much about style as it is about performance on the field. That might be a bit hyperbolic, but the star pass-catcher knows exactly how to flash his fashion game on the NFL’s biggest stages.

Heading into Thursday night’s opener against the defending champion Los Angeles Rams in Southern California, Diggs is now taking this to a whole new level. Some dude by the name of Deebo would be proud.

You had to know this was coming. It’s some extra level stuff right here. Yeah, Diggs is going with the full “Next Friday” look to pay homage to both the Los Angeles area and a legend by the name of Ice Cube.

Stefon Diggs not new to the whole cleat game

Back in 2019 when he was a member of the Minnesota Vikings, Diggs pulled out a fresh look while visiting the Los Angeles Chargers for a game. That included the Pro Bowler paying homage to the original 1995 “Friday” film. These cleats were all sorts of epic, including hair rollers on the laces.

Said cleats were also created by a world-renowned footwear artist Dan Gamache and were absolutely amazing.

Most recently, Stefon Diggs paid his respects to the late-great Betty White during a game against the New York Jets this past January. He donned these cleats just over a week after the legendary television personality passed away at the age of 99.

For Diggs and his Bills team, the hope is that this gives them some mojo heading into Thursday ight’s game against the defending Super Bowl champion Rams. The recently-extended star receiver put up 103 receptions for 1,225 yards and 10 touchdowns a season ago. He should feast with Josh Allen tossing him the rock.