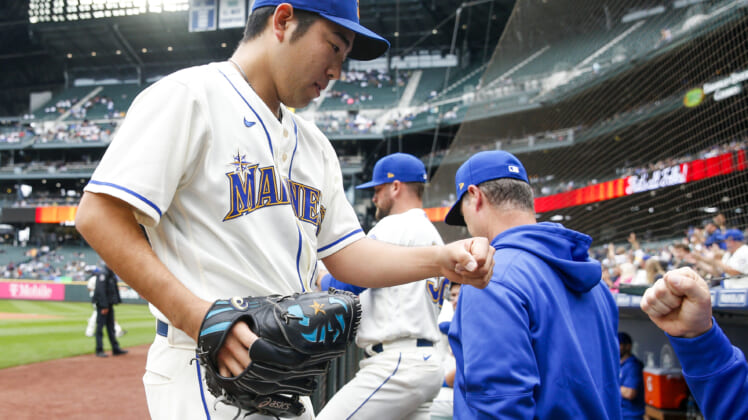 The Seattle Mariners are in the thick of the American League playoff race. At 77-66, they’re three games out of the second AL Wild Card seeding.

It has been a bizarre 2021 campaign for Seattle but one that has seen the team make substantial progress in the standings, nonetheless. When it comes to breaking their 20-year playoff drought, though, manager Scott Servais needs the Achilles heel of his ballclub to lead the way down the home stretch of the regular season.

Here’s why offensive consistency will make or break the Mariners’ playoff hopes.

At face value, the Mariners should pose a respectable threat at the plate. The combination of veteran hitters like Mitch Haniger, Kyle Seager and J.P. Crawford and the bevy of former top prospects present should be able to do the trick. On the whole, it has not.

The Mariners’ offense entered Monday 22nd in MLB in runs (608), 27th in OPS (.684) and 30th in hits (1,053) and batting average (.223). Their collective woes stem from youngsters like Dylan Moore, Jake Fraley, Taylor Trammell, Jarred Kelenic and others struggling mightily to get on base.

With all that said, there are some individuals in this offense showing promise and either have upside or a track record of slugging in years past. Ty France continues to rake and get on base. Midseason acquisition Abraham Toro has been the team’s best hitter since entering the mix in late-July, as he’s hitting .300 with 23 RBIs to his name. Catchers Luis Torrens and Tom Murphy have legitimate power from the right side.

Moore slugged at an encouraging level in 2020. Individuals like Haniger and Seager are considerable home run threats and capable of being more than mere power threats, which they have primarily been this season. The pair of veterans driving pitches for more singles and doubles helps the Mariners total a couple more runs per game.

For a team that’s playing in tight affairs on a near-nightly basis, more RBI opportunities could be the difference. Part of that thinking stems from the way their starting rotation has carried the load this season.

Seattle has been part of countless one and two-run games in both winning and losing efforts this season. Heck, they’ve played in 20 extra inning games this season. The reason they even have the chance to win these games is the reliable nature of their rotation.

While they’ve been less stellar of late, the Mariners have continually received winning performances from their starting pitchers. Chris Flexen is working out of trouble, keeping the team in games and has been steady all season. For most of the season, Yusei Kikuchi has been the team’s ace, logging strikeouts at a plausible rate and pitching efficiently.

Two months ago, Marco Gonzales was one of the worst starting pitchers in MLB, to put it bluntly. He has since come back from the dead, as the tenured southpaw owns a 2.54 ERA over his last 11 starts, where he has provided length and induced weak contact.

Tyler Anderson has been a reliable force since coming over in a trade deadline deal with the Pittsburgh Pirates, posting a 3.83 ERA and evading midgame catastrophes in eight starts. Logan Gilbert has shown glimpses of becoming a reliable strikeout pitcher.

This unit is the Mariners’ backbone and has been accompanied by a bullpen that’s picking up where the rotation leaves matters and shutting the door in narrow games; their bullpen entered Monday with a 3.84 ERA on the season. If this pitching staff was performing for a mere competent offense, the Mariners would at the very least be in possession of one of the two AL Wild Card seeds.

Improved offense does wonders for the Seattle Mariners

Seattle has a favorable schedule the rest of the way with their next six opponents being the Boston Red Sox, Kansas City Royals, and a pair of series with both the Oakland Athletics and Los Angeles Angels. Boston owns the second AL Wild Card seed, and the series is in Seattle. The Royals and Angels are out of playoff contention. Like the Red Sox, the A’s are a team that the Mariners are chasing/trying to fend off.

The Seattle Mariners have every chance to get to the Wild Card Game. They’re the better team in at least half of their games and have the chance to take matters into their own hands against teams that they’re trying to overcome. Four of their upcoming six series are against lacking rotations and a shaky A’s team.

Offensive consistency is the name of the game for the Mariners. They have the talent to perform better and opponents that enhance their chances of doing as such. Three of the five teams in the Wild Card hunt have been volatile and in some cases falling apart of late. The Mariners? They keep gradually climbing the ladder. This is a team of top prospects and proven commodities. Months of dispiriting play can be offset by opportune production from here on out.

At the end of the day, though, teams like the Red Sox, A’s and New York Yankees have proven rosters that have shown an ability to right the ship in years past. The Mariners don’t have that track record. The back-to-back one-to-two-run showings followed by a 10-run outburst isn’t a roadmap to success.

Small ball is a way for the Mariners to get around their lack of slug, which to their credit they’ve done well. Is it enough to crack the playoffs? It is not. If Seattle is participating in the one-game playoff, it means their offense manufactured more runs on a nightly basis.