One top NFL insider does not believe for one minute that the veteran stars on the San Francisco 49ers roster will be willing to be patient and let Trey Lance work through some early struggles with Jimmy Garoppolo still on the roster.

The 49ers have put themselves in a very awkward situation heading into the start of the 2022 season. Despite a 10-7 season and coming up short to the eventual Super Bowl champion Los Angeles Rams in the NFC Conference Championship game last year, the team’s brass decided to make a switch at quarterback and make Lance their starter. The decision was not shocking since the organization invested the third overall pick in the 2021 NFL draft in the North Dakota State star and there had been rumblings of this possibility anyway.

However, what has stunned many observers of the sport is the fact that the team did not trade or release Garoppolo and has instead decided to keep him around for this season. Now, Lance enters the year with a real threat behind him on the depth chart who has support in the locker room, instead of playing without that added pressure. That is something NFL insider Peter King believes could lead to a difficult moment if Lance struggles early in the season.

In a new edition of his “Football Morning in America” column, King elaborated on his belief that star players on the 49ers roster are not going to be patient and let Lance develop when they know there is a proven player on the roster who can help them win games now and give them a legitimate shot at reaching the Super Bowl in 2022. 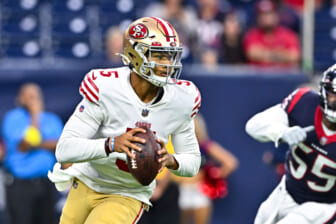 The San Francisco 49ers schedule starts off with two winnable games against the Chicago Bears and Seattle Seahawks in 2022. However, that is followed by two tough matchups against the Denver Broncos and Russell Wilson, then the Los Angeles Rams.