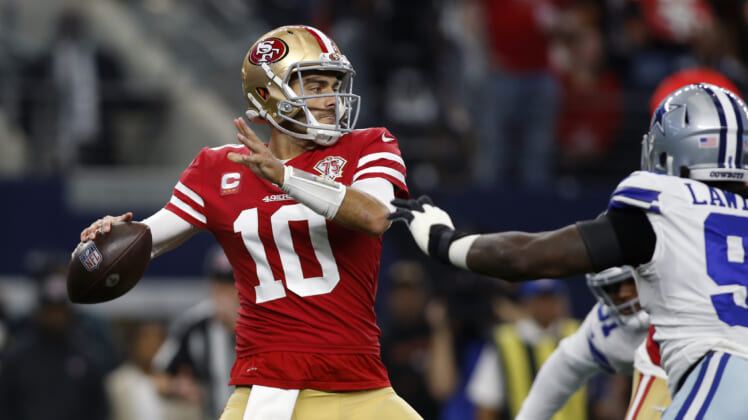 Everyone assumes a Jimmy Garoppolo trade is a matter of when, not if. But not San Francisco 49ers team owner Jed York.

York has a different, yet sensible belief when it comes to piecing together a roster. Once general manager John Lynch and head coach Kyle Shanahan have identified talent, York says he’d like to keep his best players, no matter the cost.

While some have also speculated the 49ers may be forced to release Garoppolo and his $24.2 million guaranteed salary for 2022, that seems extremely unlikely for a quarterback who helped lead his team to a Super Bowl and an NFC Conference Championship game in two of the past three seasons.

Jimmy Garoppolo will end up as a starting QB in 2022

York’s take shouldn’t shock anyone. Teams are in the business of putting together the best 53-man roster possible, and Jimmy G is certainly among their top 15 players. He has trade value, even if identifying his next landing spot as of now appears difficult.

As they say, franchises are just one snap away from being forced to play their backup quarterback, and for some playoff contenders, their backup just won’t cut it. That’s where Garoppolo could become even more valuable, driving up the 49ers’ asking price. Eventually, a team will get desperate, it’s only a matter of time.

The question is, when? This season’s NFL trade deadline comes on November 1st, which is the Tuesday after Week 8. That leaves a lot of football to be played over the next few months, leaving the possibility of an injury or other QB ineffectiveness that could lead to a team not currently in the market for a starter suddenly developing a strong need.

Garoppolo’s been one of the best 20 quarterbacks when he’s proven healthy. For others around the league to not have an interest in bringing him aboard just wouldn’t make sense.