Despite recent rumors that claimed the Cleveland Browns would contemplate a trade for San Francisco 49ers starter Jimmy Garoppolo, if Deshaun Watson’s suspension extended beyond six games, one NFL insider says they haven’t heard anything from their sources to corroborate the scuttlebutt.

Last week, reports out of Cleveland suggested that if Watson ended up getting a bigger suspension from the NFL in their upcoming appeal, they might be interested in making a deal for the best quarterback available on the trade and free agent market in Garoppolo.

Indianapolis Colts veteran Jacoby Brissett is set to be the team’s regular season fill-in for Watson and his performance during camp has not instilled confidence in fans and media that he will be able to perform anywhere near the level of the three-time Pro Bowler.

However, while Garoppolo would surely be a notable upgrade over Brissett, the idea of him landing in Cleveland after the team just handed out a massive five-year, $230 million contract to Watson always seemed like a bit of a stretch. A top NFL insider seemed to confirm that notion on Monday.

During an appearance on The Pat McAfee Show yesterday, NFL Network league insider Ian Rapoport explained why he doesn’t see a trade happening and how he hasn’t received any confirmation that it is something that has seriously been discussed in the Browns front office. 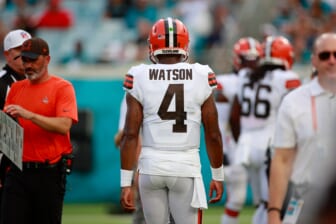 While that news may disappoint Browns fans hoping for a winning season in 2022, Rapoport’s report seems more in line with reality. Considering the money they already have invested in Watson, along with the fact that they are paying some of Baker Mayfield’s contract after trading him to the Carolina Panthers, taking on even half of Garoppolo’s $24.2 million contract this season would be very costly for a temporary move.