Is Richard Sherman really going back to the Seattle Seahawks? Both sides are reportedly interested in reuniting. Here's why it's not as crazy as it sounds. 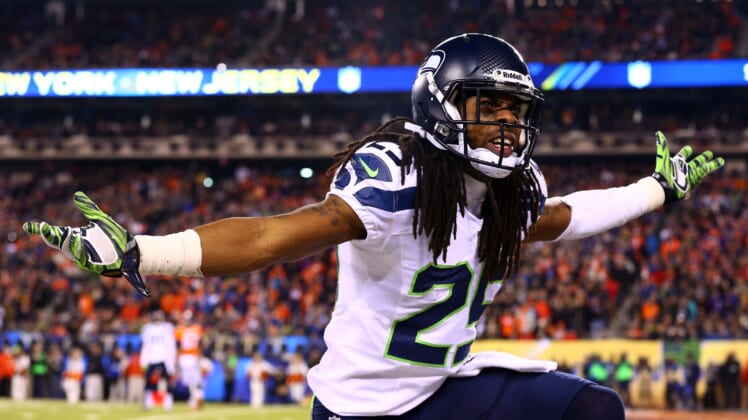 The latest NFL rumors surrounding free agency are linking future Hall of Fame cornerback Richard Sherman to the Seattle Seahawks, which would be a juicy offseason storyline and also make lots of sense for both sides from a football standpoint.

NFL Network’s Tom Pelissero reported that there’s mutual interest between the Seahawks and Sherman in getting back together after a rather messy separation several years ago.

“Richard Sherman is open to returning to Seattle. I believe the Seahawks would also be open to having Sherman back,” Pelissero said, per OurSF49ers on Twitter.

Sherman famously bolted from Seattle to San Francisco as a free agent after the 2017 season, and the team let him go in part because he was coming off a torn Achilles.

Any bad blood Sherman had for the Seahawks not sticking with him, or any spite the franchise felt for him fleeing to an NFC West rival, all seems to be water under the bridge.

It’s no secret that the five-time Pro Bowler, 2014 NFL Defensive Player of the Year and Super Bowl XLVIII champion is an emotional player. That’s been Sherman’s calling card ever since he entered the NFL as a fifth-round pick out of Stanford — and his eventual ticket to Canton and a gold jacket.

But when Sherman left the Emerald City, it seemed so unlikely that a reunion would ever be in the cards. My, how times have changed.

Who would’ve thought even as recently as last season that Sherman and Seattle would have more desire to reunite than superstar quarterback Russell Wilson apparently would have to suit up for the Seahawks in 2021?

Wilson submitted a list of teams he’d like to be traded to this offseason. The Chicago Bears made a valiant effort to acquire Wilson after they heard they were one of his preferred suitors. It wasn’t meant to be, though, as general manager John Schneider declined to move his stud signal-caller.

But there’s still some animosity in the organization, namely how head coach Pete Carroll wants to revert to building the offense around running the ball first. Meanwhile, Wilson is very much of the “Let Russ Cook” paradigm and longs to evolve his game as an all-time great.

Perhaps this is where Sherman can interject. A strong rushing attack sets Wilson up more ideally for play-action fakes, which frees up cleaner looks at downfield throws. Hardly anyone in the NFL throws a prettier deep ball than Wilson, and he has two phenomenal receivers to target on those attempts in DK Metcalf and Tyler Lockett.

Sherman knows that the strong Seahawks defense he was a key piece of in his prime as part of the “Legion of Boom” secondary was what ultimately drove Seattle to hoist the Lombardi Trophy.

When the team got too cute near the goal line in Super Bowl XLIX, Wilson wound up throwing an interception that cost the Seahawks a championship against the New England Patriots. Seattle hasn’t made it out of the NFC Divisional Round since.

Staying in the NFC West actually had to have helped Sherman stay abreast about what his original team was doing in the years since he left. The 49ers had to prepare for the Seahawks twice per season, and as it was, Sherman carried over a lot of the same concepts from Seattle to the system he ran in San Francisco.

It’d be a storybook ending to see the Seahawks sign Sherman again, but as mentioned at the top, it’s also very logical for both parties. Even though he’ll soon turn 33, Sherman isn’t on his last legs. As recently as 2019, he was Pro Football Focus’ No. 1-graded cornerback, marking the third time he achieved that feat.

If anything, Sherman will be fresher after only appearing in five games in 2020, and he isn’t in a position to truly break the bank regardless of where he signs. Why not go to a culture and coach he knows, with a quarterback — presuming Wilson isn’t traded — he knows can deliver in crunch time?

As for Seattle’s side of things, the opportunity is there to take a star player from the rival 49ers and add him alongside former San Francisco standout Ahkello Witherspoon. The Seahawks still need another viable corner opposite Witherspoon, and who better than Sherman to teach the Seahawks’ system to him, considering they’ve been Niners teammates for the past three seasons?

Sherman and Seattle should both be motivated to get a deal done. It’s a logical fit in the locker room, culture-wise and in building a bridge between Wilson and the organization to make their marriage work for the long haul.