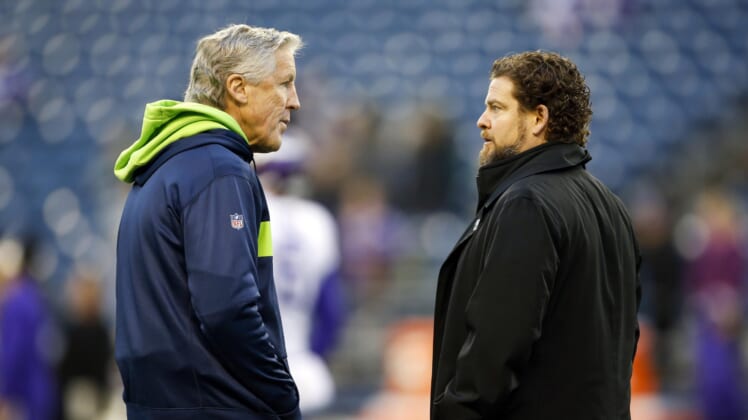 The Seattle Seahawks are always aggressive when it comes to personnel decisions, whether it be dealing away future draft picks for established stars or making polarizing first-round selections.

Few can argue that Seattle consistently assembles a championship contender, though, as general manager John Schneider and head coach Pete Carroll have fielded a competitive team year in and year out.

But with only three picks in the first five rounds of the 2021 NFL Draft as of now, the Seahawks have their work cut out to add any meaningful first-year contributors to their roster.

Let’s look at Seattle’s top draft choices and the prospects they should target with them.

Few cornerback prospects boast the combination of length, play strength, raw coverage skills and athleticism Campbell does. This could lead him hearing his name called on Day 1 of the draft, or Campbell could drop outside the first two rounds.

Considering Shaquill Griffin isn’t a lock to return and Seattle has little cornerback depth to speak of, it’d behoove the front office to acquire someone like Campbell at one of the most important positions on the roster. He’s played in the SEC and faced elite competition, so he’ll be readier than most rookies would be for the high-flying offenses of the NFC West.

If the Seahawks don’t go cornerback with Campbell, potentially his Georgia teammate Eric Stokes or someone else, then Onwuzurike makes a lot of sense. Some may view him as a better fit in odd-man base fronts, but the Huskies standout has a relentless motor and serious quickness off the ball, which would make for an intriguing interior pairing next to Jarran Reed.

Jones has the production of a first-round pick but could slide to Day 3. The Seahawks haven’t been shy about reaching for front seven players in the past, as they did with the likes of Bruce Irvin, and more recently, Malik McDowell, L.J. Collier and Jordyn Brooks. Hopefully, the Pittsburgh star who had 24 tackles for loss and 17.5 sacks in his final 22 games would pan out better.

Considering longtime linebacker K.J. Wright is hitting the open market and the Seahawks lack a lot of salary cap space, they could opt for a player in Rice’s mold. He also hails from Georgia and has three years of solid starting experience.

The presence of All-Pro Bobby Wagner in the heart of Seattle’s defense can make up for a lot of the front seven’s shortcomings, but Rice would be a great insurance option. Otherwise, Slaton is worth a Day 3 flier at this juncture of the draft.

Other than LSU’s Tyler Shelvin, there aren’t many other massive nose tackles who can clog running lanes in this class. Seattle brought Damon Harrison in for a short stint last season, and could use a more viable, long-term option to address that need on defense. That’s why Slaton pops to mind here.

As for Wiggins, he was a key player in Cincinnati’s elite defense last season, which actually came really close to beating Georgia in the postseason. Unfortunately, a torn ACL in 2019 set him back, and he was knocking off the rust from that major injury in the midst of a pandemic-ridden season.

Those factors may combine to sink Wiggins’ draft stock, yet he’s a more athletic playmaker than he’s given credit for and has very good instincts. Don’t be surprised if he winds up succeeding in the NFL sooner than many expect.

Now we’re getting into the truly granular, but this is what happens when Seattle’s third-highest draft pick is this late in the game. Hitting on a fifth-round pick who isn’t a mere depth player is a rarity.

Having said all that, these three players really fit the Seahawks’ mold well. Blankenship hails from a small school but started all four years at Middle Tennessee State and had 309 total tackles, eight interceptions and 16.5 tackles for loss in 40 games. He’ll continue flying under the radar and is among the most underrated prospects in the 2021 class.

Van Lanen is an interesting case, because he hails from the venerated Wisconsin program that seems to routinely produce NFL offensive linemen.

In 2018, Van Lanen graded as Pro Football Focus‘ top-ranked offensive tackle in the country on 560 snaps. He put up another stellar 2020 campaign in limited action, but his down year in between hurt his draft stock, as did a bad, late-season showing against Iowa this last year.

Bynum is another four-year starter like Blankenship but does hail from a Power 5 program — albeit not a great one of late. The Golden Bears of California were a .500 team in Bynum’s time there, but he was a constant rock at cornerback and didn’t miss a single game.

As long as the Seahawks can get a high-upside cornerback like Campbell in Round 2, they probably won’t feel the need to address their secondary as much with unproven rookies. Granted, that could change if they make the tough cap decision to release Quandre Diggs at safety, which would save them over $6 million in space, per Over the Cap.

Slaton doesn’t jump out as a dire need, yet he’s the type of developmental prospect strong player development programs like Seattle should covet.

Poona Ford is a restricted free agent, and should command a decent payday since he ranked 15th among PFF interior defenders last season. Seattle would have to match any contract bid another team makes in order to retain Ford.

Finally, Van Lanen is a good bet so late in the draft to at least make the roster and provide depth up front as a means of protecting superstar quarterback Russell Wilson. Van Lanen is a left tackle by trade, but could slide inside given that he’s more suited in the running game at the pro level than handling some of the elite pass-rushers off the edge.