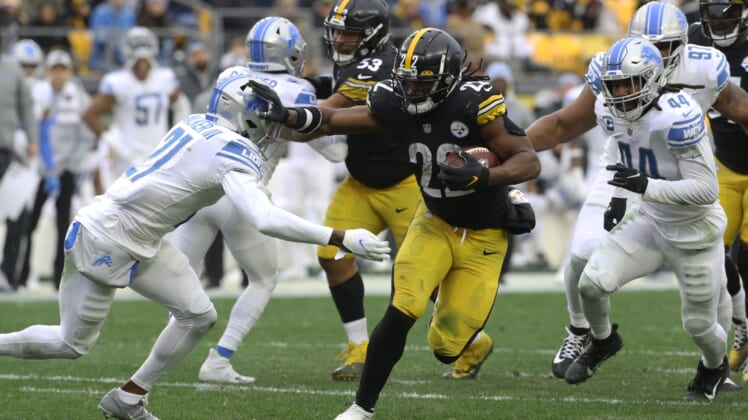 The Detroit Lions got halfway to a victory Sunday.

Detroit’s D’Andre Swift rushed for 130 yards, while the Pittsburgh Steelers‘ Chris Boswell kicked three field goals and their teams went scoreless in overtime, resulting in the NFL’s first tie of the season, a rainy 16-16 contest in Pittsburgh.

The Lions (0-8-1) remain the NFL’s only winless this season after a missed point-after kick left their early third-quarter lead at 16-10, enabling the Steelers to tie the score with a pair of Boswell field goals.

Najee Harris rushed for 105 yards and added four catches for 28 yards for PIttsburgh (5-3-1). Mason Rudolph completed 30 of 50 passes for 242 yards filling in for Ben Roethlisberger, who was inactive due to COVID-19 protocols.

Pittsburgh star linebacker T.J. Watt suffered a hip injury in the second half and did not return.

For the Lions, Swift carried a career-high 33 times, and Godwin Igwebuike bolted for a 42-yard rushing touchdown, the first of his career, but Jared Goff passed for just 114 yards.

In overtime, Detroit moved into Pittsburgh territory on its first possession before the drive stalled. The Steelers’ Diantae Johnson had a 39-yard reception when the Steelers got the ball but fumbled on the play and the Lions recovered.

Detroit got a chance to break the deadlock when a roughing-the-passer penalty moved the Lions to the Steelers 34, but when that drive also stalled, Ryan Santoso missed a 48-yard field-goal attempt.

On Pittsburgh’s final possession, starting at its own 10-yard line, Rudolph completed seven of nine passes but Pat Freiermuth fumbled on the last of those — at the Detroit 39-yard line — and the Lions recovered with eight seconds left.

The game was tied at 10 at halftime. Pittsburgh drove 83 yards with its first possession, and Rudolph hooked up with James Washington on a 9-yard pass play for the Steelers’ only touchdown of the day.

In the second quarter, Detroit got good field position after Kalif Raymond’s 48-yard punt return, and the Lions tied the score on Jermar Jefferson’s 28-yard run up the middle.

Godwin Igwebuike powered up the middle for a 42-yard touchdown to give Detroit its first lead less than three minutes into the second half, but when the extra point was missed, the Lions’ 16-10 lead would not hold.

Boswell made a 23-yard field goal midway through the third quarter and then tied it at 16 with 11:31 remaining with kick from 51 yards.