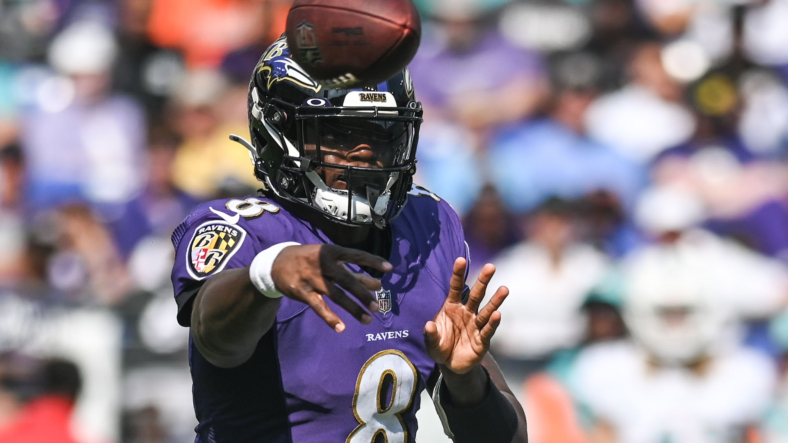 Baltimore Ravens quarterback Lamar Jackson is off to another MVP-caliber start in the 2022 NFL season, carrying the offense and strengthening his case to become one of the highest-paid NFL players ever.

Jackson turned down Baltimore’s $250 million offer before Week 1, betting on himself and the opportunity to make far more by playing out the season. If the Pro Bowl quarterback stays healthy, he’ll either receive the exclusive franchise tag ($45.4 million) or the non-exclusive tag ($30 million) and could negotiate with other teams in free agency.

When Jackson rejected the Ravens’ final offer, turning his attention toward the 2022 season, a primary reason cited was the guaranteed money. While Baltimore’s proposal would have made him one of the highest-paid quarterbacks in the NFL, it came with less fully guaranteed money in the first three years than he could make if he receives the exclusive franchise tag in 2023 and ’24.

However, guarantees aren’t the only reason the 2019 NFL MVP declined the proposal. Throughout negotiations with the franchise, even dating back to 2021, there was another major issue that the two sides still weren’t able to resolve when talks broke off in early September.

NFL insider Charles Robinson reported on the Yahoo Sports’ You Pod to Win the Game podcast that contract length remains a major sticking point between the two sides. Baltimore insists on a six-year contract and Jackson is determined to only agree on a four-year extension.

Why the length of contract matters for Baltimore Ravens, Lamar Jackson

It’s not a surprising barrier between a team and its quarterback. When Dak Prescott and the Dallas Cowboys spent more than a year negotiating his long-term extension, he wanted a four-year extension and the team held its ground on a six-year pact. Dallas ultimately caved, signing Prescott to a four-year extension.

The Ravens want Jackson to be under team control from his age 26-32 seasons. It would provide him with more guaranteed money long-term, but there is far more upside in a four-year agreement. Jackson could again test the open market before he turns 31, right in the middle of his prime and allowing him to sign another historic contract.

It’s clear there are two real barriers standing in the way of an extension between Jackson and the Ravens. Baltimore will lose even more leverage once it franchise tags the superstar quarterback and it will cede even more control as time goes on, if he stays healthy.