Star NFL QB hit by fan in the stands after overtime win. 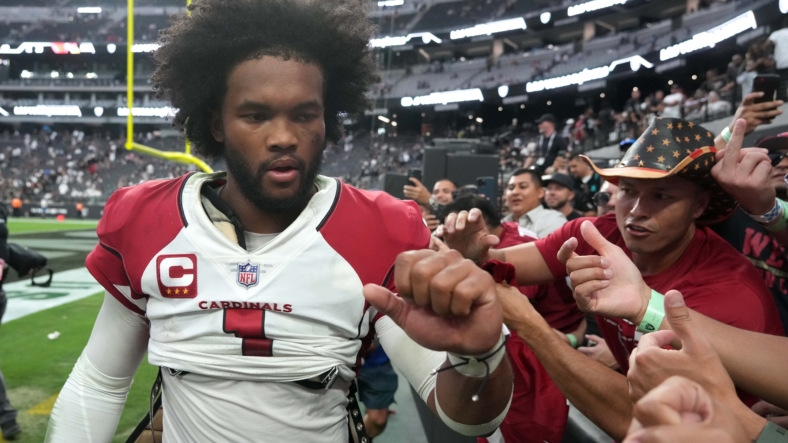 The football community witnessed an incredible late-game comeback from Kyler Murray and the Arizona Cardinals on Sunday afternoon. Trailing 21-0 to the Las Vegas Raiders at one point, the Cardinals managed to fight all the back to push the game into overtime where Byron Murphy’s 59-yard fumble return for a touchdown sealed the deal.

It was an epic moment that gave Arizona many reasons to celebrate, but it was also Murray’s heroism that helped the Cardinals reach the overtime period, such as this wacky 20-second play that had the speedy quarterback running for his life.

But that was just the two-point conversion to tie the game. It was Murphy’s touchdown that sent Allegiant Stadium into a frenzy.

Once the game was over, Murray wanted to embrace some of the Cardinals fans who were in attendance by going up to the seating arrangements in the first row of the stadium. That’s when one fan went overboard, taking the celebration way too far.

Specifically, a spectator can be seen striking Murray in the face with his hand in this clip below.

Maybe it was an accident or simply the product of so much movement happening in a tight space. Either way, we can clearly see that Murray was hit, and we can also see who did it. Murray then appears to turn back around and head toward the crowd, trying to identify, and possibly go after the fan in question. Not a good look for anyone involved.

Because of the contact between the fan and the player, the Las Vegas Police are conducting an investigation into the matter. Vegas police officer Larry Hadfield admitted a battery complaint was filed at roughly 6:30 PM at the stadium. The suspect was not immediately identified, but the investigation is still ongoing.

Typically in cases like this, where a fan violates the stadium’s attendance policy by assaulting a performer, the spectator is banned from all further events and sometimes even faces criminal charges. Who knows if we’ll ever hear a follow-up to this story, but for anyone reading, let this serve as a reminder not to allow your emotions to get out of control when your team doesn’t live up to your expectations.