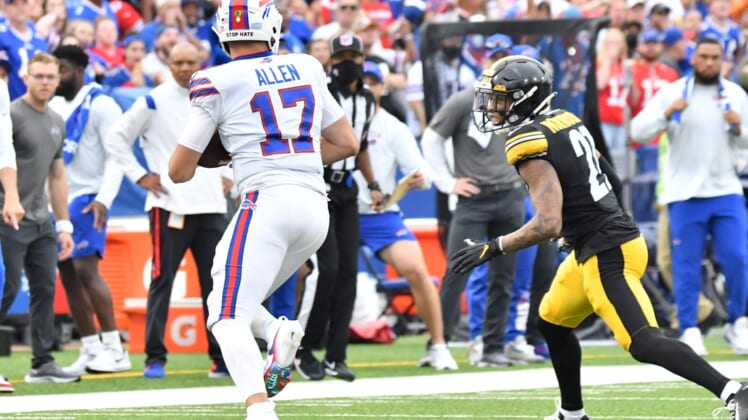 Dominant defense and a special teams score helped the Pittsburgh Steelers overcome a sleepy first half and knock off the Buffalo Bills 23-16 in Orchard Park, N.Y. on Sunday.

The Steelers’ special teams crashed a defensive struggle with 9:45 left on the game clock. Safety Miles Killebrew blocked Matt Haack’s punt at the Buffalo 10-yard line and Ulysees Gilbert III scooped up the ball for Pittsburgh’s 20th unanswered point, all in the second half.

Wide receiver Diontae Johnson made a juggling catch in the back corner of the end zone to give the Steelers their first lead, 13-10, with 11:19 to play.

Steelers linebacker T.J. Watt had two sacks and Bills quarterback Josh Allen completed 30 of 51 passes for 270 yards and a touchdown.

Chris Boswell netted a 45-yard field goal to push the Steelers ahead 23-13 with 2:42 remaining in the game.

Tyler Bass knocked in a chip shot field goal with 5:23 left, trimming the Bills’ deficit to 20-13.

Pittsburgh grabbed momentum on defensive back Cameron Sutton’s stop on a fourth-down attempt by the Bills near midfield with 13:42 left in the game. Sutton didn’t fall for a fake run up the middle from a power formation and tripped up Matt Breida for a seven-yard loss.

The Bills lost a regular-season game for the first time since Nov. 15, 2020 at Arizona.

The Steelers were shut out in the first half but cut it to 10-6 on Boswell’s pair of field goals in the third quarter, including a 20-yarder after a spoiled first-and-goal situation.

With 22 seconds left in the first half, Allen floated a 3-yard touchdown pass to wide receiver Gabriel Davis for a 10-0 Bills lead. The TD capped a 13-play, 91-yard drive for the Bills. Allen took a jarring blow to the back from Watt as he let the pass go and Sutton heavily contested the reception.

Watt closed from behind to strip the ball from Allen for the first takeaway of the game midway through the second quarter, but Pittsburgh lost 10 yards on three plays and punted the ball back to the Bills.