Philadelphia Eagles trade up to No. 10 pick with Dallas Cowboys, draft DeVonta Smith

The Philadelphia Eagles traded with the Dallas Cowboys to 10th overall and chose Heisman Trophy winner DeVonta Smith in the 2021 NFL Draft. 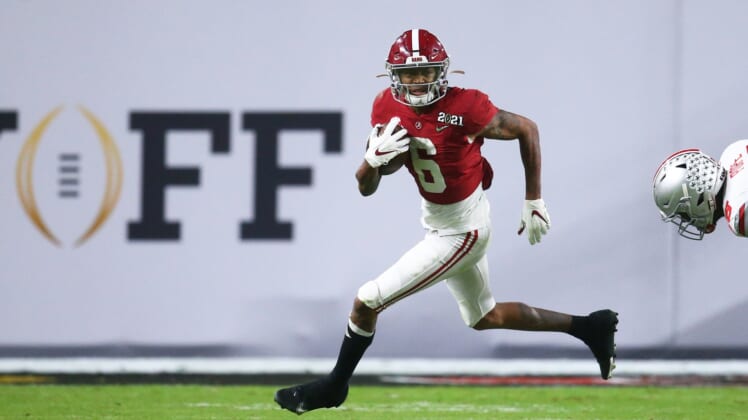 Smith, the reigning Heisman Trophy winner, is the No. 9 prospect on our NFL Draft big board. As part of the deal, per ESPN’s Field Yates, the Eagles will send the Nos. 12 and 84 overall picks to the Dallas Cowboys.

Smith is the smallest pass-catcher among the top prospects, and some even view his teammate Jaylen Waddle as a Tyreek Hill type who’ll have a better pro career.

However, after being overshadowed by eventual first-round picks Jerry Jeudy and Henry Ruggs, Smith returned to the Crimson Tide to win the Heisman Trophy and set the college football world ablaze in 2020 en route to a national championship.

Smith racked up 117 receptions for 1,856 yards and 23 touchdowns, as he and Mac Jones formed a unique connection that carried one of the NCAA’s best offenses of all-time.

Drawing comparisons to Marvin Harrison for his diminutive size but elite production, Smith is more than a product of a system. He’s a nuanced route-runner who’s aggressive at the catch point, can run a full route tree and has phenomenal lateral quickness to avoid getting jammed in press coverage.

Being counted on to be the No. 1 receiver right away isn’t easy, as Smith isn’t exactly the prototype at the position. While the Eagles do have 2020 first-rounder Jalen Reagor on the roster, there isn’t much help at the position beyond him.

If Reagor can take a big step forward as a sophomore and Smith is able to make an instant impact, suddenly Philadelphia’s infamous decision to draft Reagor over Justin Jefferson won’t look so bad in hindsight.

Philadelphia quarterback Jalen Hurts badly needs some pass-catchers to step up for him in 2021 if he’s meant to prove he can be the long-term starter under center. Reuniting with a former Alabama teammate in Smith should give Hurts some reassurance that the organization has faith in him, and believe he can thrive under the right circumstances.

As the rest of the draft goes on, the Eagles should add at least one more weapon to their receiving corps. Otherwise, they might consider adding another tight end alongside Dallas Goedert, because Philly is intent on trading Zach Ertz soon.