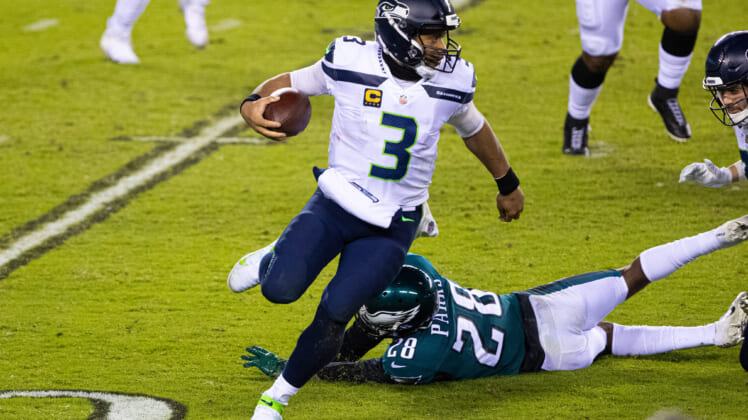 The Denver Broncos stole the headlines yesterday when trading for Russell Wilson, but new reports have since emerged suggesting the Philadelphia Eagles had just as much interest in acquiring the franchise quarterback.

While it may appear that Jalen Hurts is entrenched in Philly as the starter, it sounds like general manager Howie Roseman preferred a different quarterback, if only he could have landed him.

Unfortunately, Russ wasn’t willing to waive his no-trade clause for the Eagles, just as he wasn’t interested in joining the Washington Commanders. But, the Eagles did make a trade offer for Russell Wilson.

According to Jake Heaps of Seattle Sports 710, the Eagles made their proposal for Russ during last week’s NFL Scouting Combine.

“The reason why this [deal] happened so quickly and progressed quickly is because, one, Denver was working on this behind the scenes for a while now.

The other reason is because the Seahawks were limited, guys. There’s not real leverage if there’s only a certain amount of teams that Russell Wilson’s actually interested in or be willing to waive his no-trade clause for.

And the Denver situation was the clear-cut, number one choice for him going into all these other teams.”

Is Jalen Hurts safe as the Philadelphia Eagles’ starter in 2022?

It seems a bit odd that the Philadelphia Eagles are still searching for a different quarterback. All Jalen Hurts did in his first year as a starter is help lead his team to the playoffs in coach Nick Sirianni’s first year at the helm.

Sure, there’s a fair argument to be made that Hurts doesn’t offer nearly as much as Russell Wilson does from a passing perspective, but the Eagles still had a potent offense led by Hurts’ running ability a year ago. Who’s to say the 23-year-old QB can’t continue making strides as he gains experience?

Of course the Eagles had the draft capital to make a deal happen, three first-round picks is ridiculous, but they could just as easily build a very impressive roster around the young quarterback they already have. This team still has several holes that need to be addressed. Maybe try and hook Hurts up with a few more targets, and to quote Gio the Podcaster, “for the love of God, can we get some linebackers?”