The Green Bay Packers hold most of the leverage in the ongoing drama with Aaron Rodgers, but the NFL’s announcement about player opt-outs in 2021 might give the reigning MVP a little edge at the negotiating table.

Rodgers and the Packers are at odds, with the All-Pro quarterback refusing to return to Green Bay months after asking for a trade. The tension between the two sides reached a boiling point this offseason after the franchise initially rejected the future Hall of Famer’s suggestion for a contract extension.

Thus far, Green Bay isn’t even giving rival clubs a hint of trade discussions. Instead, general manager Brian Gutekunst immediately informs teams that Rodgers is staying in Green Bay, despite his issues with the organization.

Many around the NFL seem to have given up hope on a blockbuster trade happening this summer, recognizing the Packers hold all the leverage. If Rodgers sat out this fall, which he has threatened to do, he would forego more than $30 million on his contract and be required to pay back several millions of dollars to the franchise. 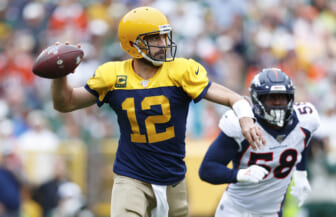 Also Read:
Teammates, NFL execs expect Aaron Rodgers to do this in 2021

It left the 37-year-old quarterback with a difficult decision and very little leverage over his team. Either he plays for Green Bay this fall or he sits out one of his remaining prime years and loses out on $30-plus million. But now, he just gained a fallback plan.

Pro Football Talk’s Mike Florio reported Friday that Rodgers would be allowed to opt-out of the upcoming season. if he takes that step, citing concerns about playing due to COVID-19, he would recoup some money. Under NFL rules, Rodgers wouldn’t forfeit his $11.5 million signing bonus and he could still earn $6.8 million in roster bonuses this fall. 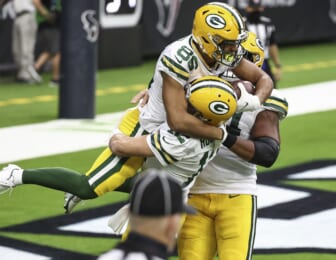 It’s an interesting wrinkle in this saga, one that makes it a bit more likely we don’t see Rodgers playing this fall. But it also comes at another cost and there is little time to waste before a decision must be finalized.

Will Aaron Rodgers opt-out of the 2021 season?

There is very little time for Rodgers to decide his future and there is a lot at stake. If the three-time MVP exercises his opt-out clause by July 2, he is not allowed to change his mind and will be ineligible for a return.

At the very least, there is $18.3 million on the line by July 2. If he opts out, the Packers stop negotiating with Rodgers and don’t revisit things with him until the 2022 offseason. So, while there are financial benefits to this move, he still misses out on his owed salary this season and can’t play football.

There’s a possibility that Rodgers sees the writing on the wall, realizing the Packers won’t trade him this season. If that’s the case and he is determined to never play for Gutekunst and CEO Mark Murphy again, then opting out is his best decision.

Ultimately, Aaron Rodgers would be wise to let this deadline pass. He can skip the beginning of training camp, taking daily $50,000 fines, while hoping the Packers either relent or offer him whatever contract he wants. If nothing works out, it’s likely in his best interest to swallow his pride and return for one last season in Green Bay.

Based on what his friends and teammates have said, this is the likeliest outcome.