The Oklahoma Sooners struck gold in 2017 when they promoted Lincoln Riley to replace former head coach Bob Stoops. After an incredible run with the Sooners, another Oklahoma coaching search is underway.

Riley, who engineered one of the best offenses in college football and sent multiple quarterbacks to the NFL, is on his way to USC. It’s a devastating blow for the Sooners, especially after the program signed him to an extension in 2020. With the Sooners joining the SEC, it’s more crucial than ever to get this hire right.

Fortunately, the Sooners have a lot going for them. This program has had just two football coaches since 1999, it makes a ton of resources available for its football program and joining the SEC will generate even more revenue and attention. With plenty of talent on the roster, this should be one of the most coveted coaching jobs available. 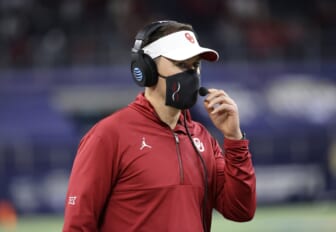 Mark Stoops, Bob Stoops’ younger brother, must be among the favorites to become the next Oklahoma Sooners head coach. While the 54-year-old never spent time at Oklahoma, that could be viewed as a positive thing. He worked up the coaching ranks on his own, finally becoming a head coach in 2013.

Things started slowly at Kentucky. The Wildcats won 12 total wins in the first three years (2013-’15), but people within the program saw signs of a great coach and Stoops stuck around. The Wildcats won seven-plus games annually from 2016-’29 and are destined for a nine-win campaign this year. Stoops has worked with unheralded recruits and found success, especially on the defensive side. Considering how many years it’s been since Oklahoma’s defense was even respectable, Stoops should be a top target.

The Cincinnati Bearcats are going to become the first non-Power 5 program to earn a spot in the College Football Playoffs. A few years ago, that seemed like an unfathomable scenario. It’s a credit to Fickell, who could become the next top coach to emerge out of Cincinnati.

Look at how quickly Fickell turned Cincinnati around. Following 11 total wins in the final two years under Tommy Tuberville, the Bearcats’ transition under Fickell was almost seamless. Following a 4-8 season, Cincinnati followed that with consecutive 11-win campaigns and capped those years off with bowl victories. In 2020, the Bearcats went 9-1 and finished the year as a consensus top-10 team.

Fickell is selective about where he wants to go, the Midwest is his home. But moving to Oklahoma would be a much easier transition for his family than heading to California or Florida. He’d walk into a stable program with a great quarterback, phenomenal resources and every chance to compete for a playoff spot every year.

The Bob Stoops coaching tree might come into play during the Sooners coaching search. If it does Nevada head coach Jay Norvell will undoubtedly be a candidate for the Oklahoma job. Norvell began his coaching career as a graduate assistant with Iowa in 1986 and has worked his way up the ladder, including a stint in the NFL (1998-2003).

Hired by Stoops in 2008, Norvell gained experience as the Sooners’ receivers coach and co-offensive coordinator (2008-’14). He finally got a shot to become a head coach in 2017, taking over at Nevada. A program that went 23-27 in four seasons under Brian Polian became a perennial conference threat under Norvell.

There is an argument that Oklahoma won’t hire someone who was fired during a previous stint as the Sooners’ offensive coordinator. But Norvell has proven that he is one of the most underrated coaches in college football, winning with hid mind and leadership rather than an abundance of talent.

Speaking of former Oklahoma Sooners coaches, Tennessee Volunteers head coach Josh Heupel might be on the radar. He took the Vol’s head-coaching job before the 2021 season as the program was at one of its lowest moments. With countless players leaving Tennessee, expectations for Heupel and the Vols were extremely low this year.

Heupel is very experienced working with quarterbacks, knows how to recruit in major conferences and found success at UCF and Tennessee under challenging circumstances. While there might be more high-profile candidates Oklahoma goes after, Heupel’s ties to the program and his early work at Tennessee should generate interest.