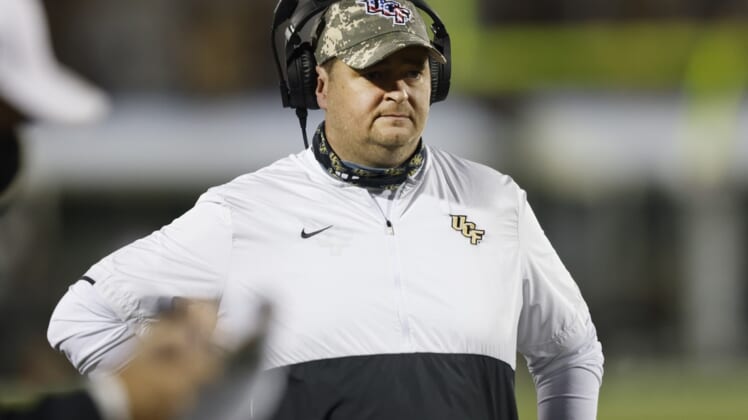 Josh Heupel is the new head coach at Tennessee.

Heupel accepted the position with the Volunteers from new athletic director Danny White, whose previous football coaching hire was Heupel at UCF.

“We looked at a number of potential candidates,” White said Wednesday. “Josh Heupel, who I had the privilege of working with for three years, is everything we were looking for: winning with integrity, a history of championships and the architect of explosive offenses. He is a players’ coach and the kind of person the student-athletes go the extra mile for. I saw that first-hand, and you can see it in his coaching record.”

The news shifts the narrative in Knoxville, Tenn., where the program has been mired in controversy for weeks. Jeremy Pruitt was fired for cause on Jan. 18 following an investigation summarized by university chancellor Donde Plowman as “serious violations of NCAA rules.”

“I am thrilled to be coming to Tennessee,” Heupel said Wednesday in a statement released by the school. “I understand that Volunteer fans are hungry for a return to the top that they so richly deserve, and it is my goal and commitment to bring a championship back to Rocky Top.”

Since Philip Fulmer was fired in 2008, the Volunteers have now hired six different head coaches.

White was hired as Tennessee athletic director last week and used a search firm to conduct multiple interviews in a five-day span.

As a senior quarterback at Oklahoma, Heupel finished second in the Heisman Trophy voting in 2000 and led the Sooners to a 13-0 record and a BCS national championship.

“With our two vacancies, we have an opportunity to define the future of UCF Athletics,” school president Alex Cartwright said in a release. “When we had a similar opportunity five years ago, UCF made many hires that quickly elevated the national profile of our athletics programs. I look forward to working with all of our coaches, student-athletes, athletics staff and fans to continue building on our momentum.”

Shannon has been with the Knights since 2018 after previously serving as the head coach of the Miami Hurricanes (2007-10). He has also been an assistant coach at TCU, Arkansas and Florida and with the Miami Dolphins.

UCF said a search firm is being assembled this week to identify candidates for the athletic director job, and that the new AD will lead the search for a new football coach.

Josh Heupel notified the team Wednesday morning he was taking the job at Tennessee.

“We would like to thank Coach Heupel for his contributions to UCF, and we wish Josh, Dawn, Hannah and Jace the best in their new endeavor,” Carr said in the release. “We are a perennial top-25 program with a very talented team returning for the 2021 season. We have achieved tremendous success in the classroom and in our graduation rates. The future of UCF athletics is very bright with the hard work and dedication of our student-athletes, the passion of Knight Nation, our talented staff and coaches, and the leadership of President Cartwright. We are confident that we will find the right head coach to lead our football program.”