The Oklahoma City Thunder have a two-way star in Shai Gilgeous-Alexander. On the other hand, they’ve been one of the worst teams in the NBA over the last two years and don’t have a second definitive building block.

Now, the Thunder have a plethora of players on rookie deals, some of which have flashed starting potential, and 19 first-round draft picks over the next seven years. The time has come for them to begin deploying these assets in trades, as they have minimal open roster spots and draft picks can deteriorate in value based on the NBA’s volatility.

Here are three offseason trade targets for the Thunder.

The Thunder have struggled to shoot, score and defend. Turner improves Oklahoma City in all three areas.

The big man is a well-versed player who fits any NBA offense. Turner is an elite shot-blocker who defends the rim, has a respectable outside jump shot and is an athletic player at 6-foot-11. Offensively, Turner gives the Thunder someone to stretch the floor and benefit from the double-teams that Gilgeous-Alexander and Josh Giddey attract off the dribble.

Oklahoma City is deep in wings and forwards, but they don’t have a concrete center. Turner fills that void, serving as a veteran complement to a young roster on both ends of the floor. He’s also still just 26.

Oklahoma City has three first-round selections this year. They can afford to surrender No. 12 and Roby for Turner, as they also pick second and have enticing forwards like Darius Bazley and Jeremiah Robinson-Earl. From Indiana’s perspective, they get another lottery selection in this year’s NBA Draft for a player who’s entering a walk year.

In the aftermath of this trade, the Thunder still pick second and can make more hay on the trade market.

Everyone not named Trae Young is likely available at the right price on the trade market for the Hawks after a first-round playoff exit. Taking Collins off Atlanta’s hands would be a savvy move for the Thunder.

Yes, the Thunder have a handful of young forwards. The issue is few, if any of them have sustained considerable success. Acquiring Collins represents a way for the Thunder to bypass some frontcourt growth.

Collins is a bouncy and versatile player. The lengthy forward hits the boards at a high level, skies above the rim and has a reputable perimeter game. When the Thunder get out and run, Collins will finish off fastbreaks while being a vital part of their halfcourt offense. Collins’ game will feed off Gilgeous-Alexander and complement their roster’s strong suit.

Draft selections 30 and 34 have zero value to the Thunder, but they offer the Hawks potential pieces for a subsequent trade up in the draft. Meanwhile, Dort could be a day one starter for the Hawks depending on the way their offseason unfolds, Bazley is a plausible backup forward and they clear future cap space by moving Collins.

Similar to a trade for Turner, the Thunder can acquire Collins and have the ammunition to make another move. Maybe they find a way to muster trades for both Collins and Turner?

Would Mitchell consider a trade to the Thunder, an entrenched rebuilding team that has traded/lost an overwhelming amount of prominent players over the last decade? Probably not, but it’s worth a shot. From a basketball point of view, Gilgeous-Alexander and Mitchell would make for one of, if not the best backcourt in the NBA.

While he’s coming off an inefficient season, Gilgeous-Alexander is adept at draining shots from behind the arc and off the dribble. Mitchell is accustomed to scoring by attacking the rack. Both players are impactful and highly productive in their own right. Furthermore, they’d be the best player the other has played with in their NBA career. 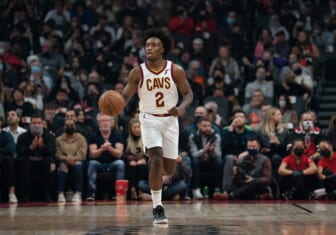 The No. 2 and 12 selections, a 2023 first-rounder, Giddey and Dort headline a fair trade offer for Mitchell, which is likely as good as any the Jazz would receive. In thought, they get a new franchise centerpiece with the No. 2 pick, a nifty facilitator who’s a mere year into his NBA career (Giddey) and a 23-year-old shooting scorer (Dort).

The Thunder have compiled a historic amount of draft capital so they can acquire a player like Mitchell. Heck, they could pull off this trade and then make a similar offer for another top-20 player. They’re that loaded in assets.

A Gilgeous-Alexander-Mitchell backcourt, accompanied by a bevy of improving young players (having a pair of star guards alleviates some of the pressure for players on rookie deals to chip in offensively) puts the Thunder on a prosperous path. They’ll compete for the Western Conference Playoffs from the jump and have a young star duo under contract for the long haul.