No. 1 Georgia focused on unfinished business 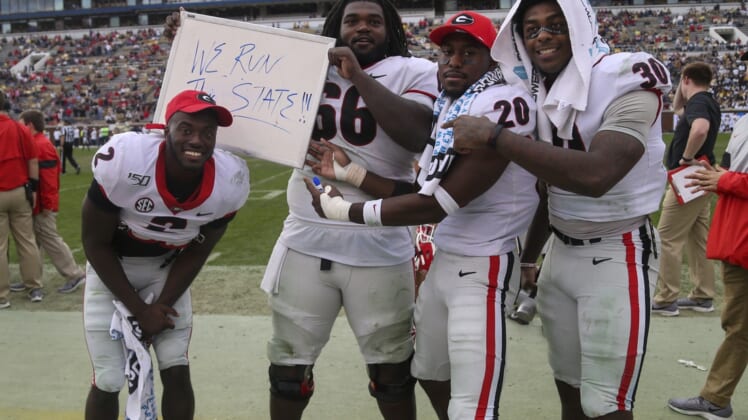 Amid top-ranked Georgia’s history-making season, coach Kirby Smart doesn’t want to talk about the past.

Georgia punctuated its first 12-0 regular season with a 45-0 win over Georgia Tech (3-9) on Saturday. The last time the Bulldogs were 12-0, they were celebrating beating Notre Dame to win the Sugar Bowl and claim their last national title in 1980.

The Bulldogs have allowed just 83 points all season, which is nearly 100 fewer than any other team. They’ve allowed an average of 6.92 points per game, by far the best mark in the Football Bowl Subdivision. Second-place Clemson has given up 180 points, an average of 15.0 per game.

Georgia’s 6.92 points allowed per game are the fewest in a season since Oklahoma allowed an average of 6.8 en route to finishing 11-1 in 1986. The Bulldogs’ three shutouts are tops nationally.

Up next for Georgia is its nemesis, No. 3 Alabama (11-1), which it meets in the Southeastern Conference title game on Saturday in Atlanta.

While Georgia’s spot in the College Football Playoff is all but guaranteed even with a loss to Alabama, the Crimson Tide must beat Georgia for a seventh straight time to be guaranteed an opportunity to defend their national championship.

“We’ve got some more business to take care of,” Georgia quarterback Stetson Bennett said. “It’s cool to look at, and hopefully 20 years from now we’ll be able to look back and say we went undefeated through the regular season. But for right now, we’re going to take what this game gave us and move forward.”

For all of Georgia’s wins the past few years under Smart, the Bulldogs don’t have one over the Crimson Tide. Alabama defeated Georgia in the national championship game on Jan. 8, 2018, and followed that up with a victory in the SEC title game on Dec. 1, 2018.

The Bulldogs saw their 45-0 dismantling of Georgia Tech, which failed to penetrate Georgia’s 25-yard line, as just another step to their ultimate goal.

“It’s something we’ll look back on and be really proud of,” Smart said. “But a lot more is going to be judged based on what we do in the future.”

Georgia has won the SEC’s East Division in four of the past five years, but it has watched two other SEC teams — Alabama and LSU — combine for three national championships during that span. The Bulldogs haven’t won one since Ronald Reagan was in the White House.

“We talk about ascending and trying to get better every week,” said Georgia linebacker Nakobe Dean, whose team’s current 16-game winning streak is the longest in the FBS. “I’ve talked about it before. It’s always how we finish the season. If we don’t finish the right way, none of this really matters. It’s always how we finish. I’m thinking about the next one right now.”