Once again, one of the most exciting days in hockey has come and gone. On NHL trade deadline day, most of the buzzed about players, including goaltender Marc-Andre Fleury, found new homes. Meanwhile, other highly-coveted players, including Arizona Coyotes blue liner Jakob Chyrchrun, stayed put.

Some teams, like the Anaheim Ducks and the New York Rangers, made a lot of noise on NHL trade deadline day, while others who were expected to make noise, like the Carolina Hurricanes, stayed quiet. Being busy isn’t necessarily a good thing, as evidenced by teams who gave a lot of their key pieces away to accelerate a rebuild. Here are four winners and losers from NHL trade deadline day. 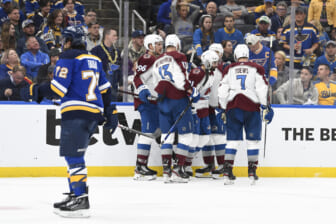 With the additions of Josh Manson and Nico Sturm just ahead of trade deadline day, the Avalanche made a few more depth moves on March 21. Every move was a decidedly playoff-looking acquisition, adding grit and depth to a roster that is brimming with talent. The current Stanley Cup favorites added veteran forward Andrew Cogliano, who will be a welcome piece on their penalty kill.

They also traded for forward Artturi Lehkonen, sending prospect Justin Barron and a second-round pick in the 2024 entry draft back to the Montreal Canadiens. They didn’t lose anyone (after Tyson Jost) from their starting roster, and added depth. This only helps considering Gabriel Landeskog and Samuel Girard are out for a large chunk of the final stretch.

Many expected the Canes to be busy this year, but they stayed eerily quiet for most of NHL trade deadline day. Both of their moves came later in the day, and one saw them extend a current roster player. Jesperi Kotkaniemi inked an eight-year, $38.56 million extension to stay in Carolina. The club will also rely on the 21-year old Finnish forward (a third overall pick in 2018) for offense down the playoff stretch.

Max Domi also joins the Hurricanes lineup as a likely rent-a-player. He’s an unrestricted free agent at the end of the season, carrying a $5.3 million price tag . Domi struggled with his former team, the Columbus Blue Jackets, where he was sent after spending some time with the Arizona Coyotes. The 26-year-old has eight goals and 21 points in 36 games this season. Many expected the Canes to make moves similar to those of the Avalanche, preparing for a playoff push. But they seem to have opted to stick with their current roster.

One of the surprises in the NHL this season, the Rangers boosted their roster on trade deadline day. They acquired Justin Braun from the Philadelphia Flyers, Tyler Motte from the Vancouver Canucks, and Andrew Copp from the Winnipeg Jets. Like the Avalanche, the Rangers didn’t lose any key pieces on their roster, and have added grit, defense and secondary scoring (to compliment Artemi Panarin and Mika Zibanejad) to the club.

The Rangers are prepping for the playoffs, and adding young, fresh talent helps them in an extremely tight Metropolitan division. Copp is an unrestricted free agent at the end of the year, and the Rangers have the cap room to offer the young forward a longer term deal — something the Jets couldn’t provide.

Another eerily quiet team, the Knights could have used any acquisition at all to fill into their struggling roster. But, their lack of cap space was an issue, as their early season acquisition of Jack Eichel carried a $10 million price tag.

But, they could miss the playoffs, and their only move was sending Evgenii Dadonov to the Anaheim Ducks in a three way trade that saw Vegas receive defenseman John Moore and the contract of injured, essentially retired forward Ryan Kesler. It frees $5 million of cap space, which is valuable for the team in the future and as soon as oft-injured Mark Stone comes off of long-term injured reserve.

Rumours swirled that the Golden Knights were in on the Rickard Rakell sweepstakes, but lost to the Pittsburgh Penguins for a former 30-goal scorer with a very team-friendly contract. In losing, they were rendered virtually incapable of making any other moves on trade deadline day, making them losers on the day.