With the shortened, timeline-adjusted season, NHL free agent frenzy, better known as the day the top free agents officially become available to the entire league, was pushed to Wednesday, July 28.

Normally on July 1, this year’s offering saw some of the league’s most valuable names — such as Alex Ovechkin, Gabriel Landeskog and more — go down to the wire before officially becoming available for the entire league to bid on at noon on the 28th.

With a flurry of signings — some expected, some shocking — taking place almost exactly when free agency opened at noon, some teams took huge hits, and some became huge winners within the first 24 hours of NHL free agent frenzy. Read on to see what clubs we’ve deemed winners, and which we’ve deemed losers.

As the winners of the Dougie Hamilton sweepstakes, the Devils became the club that signed one of the most coveted free agents on the market this year.

Hamilton and Jaccob Slavin were a solid defensive pair for the Carolina Hurricanes this season, helping catapult the Canes to the top of the Central Division. They were great in both ends of the ice, in special teams positions and in regular gameplay, and can be relied on for both offensive and defensive gameplay.

Signing Hamilton to a seven-year, $63 million deal indicates that the club wants him in their #1 spot on the blue line, which led to speculation that P.K. Subban is on the move. He, too, has a huge contract, and has been struggling with the Devils of late–made worse by his Covid-19 diagnosis.

They’ll likely have to retain some of his salary but, as NHL free agent frenzy continues, options definitely exist for the Devils.

Signing Zach Hyman to a multi-year, multi-million dollar deal, with a crazy no movement clause, is a bit of a puzzling decision from Ken Holland and his team.

Sure, Hyman had a great season with the Toronto Maple Leafs, playing alongside Auston Matthews and Mitch Marner, but the length and the AAV of the contract–seven years, $5.5 million–seem like a lot for a young forward. He’ll play with McDavid, of course, but the deal will hardly solve the Oilers’ roster problems.

They lost Adam Larsson to the Seattle Kraken, and traded Ethan Bear to the Hurricanes. During NHL free agent frenzy, they re-signed Tyson Barrie and signed Cody Ceci, but these lengthy, expensive contracts–especially the one awarded to Hyman–still might not solve their roster issues. They’ll need to rethink their strategy going forward. 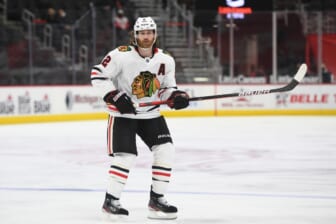 After a somewhat underwhelming expansion draft, the league’s newest franchise made some big waves during NHL free agent frenzy.

Signing former Avalanche goaltender Philipp Grubauer to a very attractive deal, the Kraken now have Grubauer and Chris Driedger in the blue paint, Larsson and Jamie Oleksiak on the blue line, and Jordan Eberle, Jaden Schwartz and Alex Wennberg up front (the latter two came from NHL free agent frenzy, while Eberle came in the expansion draft), the Kraken are well on their way to a fully formed, solid roster.

It seems likely that the Kraken are not done yet, keeping busy and using the tools they acquired in the expansion draft to make trades and sign other free agents.

Beyond losing Hamilton to the Devils, the Hurricanes lost Alex Nedeljkovic, Petr Mrazek and James Reimer–considered to be one of the best goaltending trios in the league–in NHL free agent frenzy, replacing them with Freddie Andersen, who struggled for the Toronto Maple Leafs this season.

What’s more, they signed Tony DeAngelo, who made waves with his controversial statements and troubles in the New York Rangers locker room this season.

DeAngelo sat out for most of the Rangers’ campaign and, in one of the few games he did suit up for, was absolutely dangled by Islanders forward Mathew Barzal. Many speculated that his on-the-ice play was not worth his off-ice antics, but it appears the Hurricanes are willing to take a chance, hoping he’ll take on at least some of Hamilton’s role.