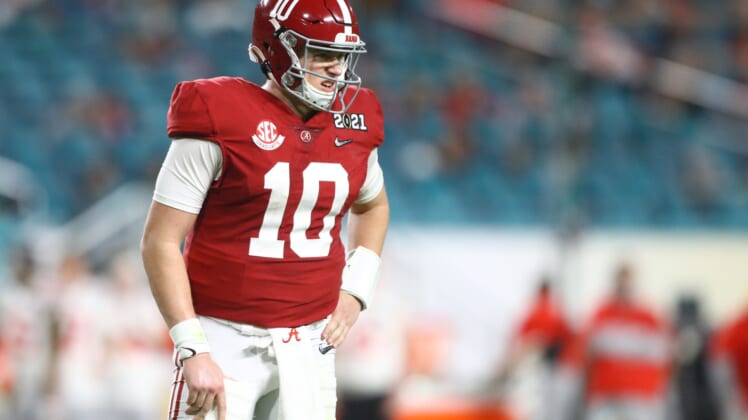 Former Alabama quarterback Mac Jones was a divisive figure leading up to the 2021 NFL Draft. Some predicted that he would go as high as No. 3 overall to the San Francisco 49ers. That did not happen after San Francisco selected fellow quarterback Trey Lance.

Once the Chicago Bears moved up to the 11th pick for Ohio State signal caller Justin Fields, there was some talk that Jones might fall down the draft board. It did not happen.

In true Bill Belichick fashion, the six-time Super Bowl champion and his New England Patriots selected Mac Jones at 15 without having to trade up.

New England was in the market for a trade up throughout the entire pre-draft process. Heck, they were in on Jimmy Garoppolo up until recently.

Mac Jones won two College Football Playoff National Championships with Alabama Crimson Tide. One as a reserve Quarterback in 2017, and another as a starter in 2020. In 2020 he also won the Davey O’Brien, Johnny Unites Golden Arm, and Manning Awards.

He’ll now be tasked with replacing GOAT Tom Brady over the long-term. Needless to say, this pick was the talk of social media.