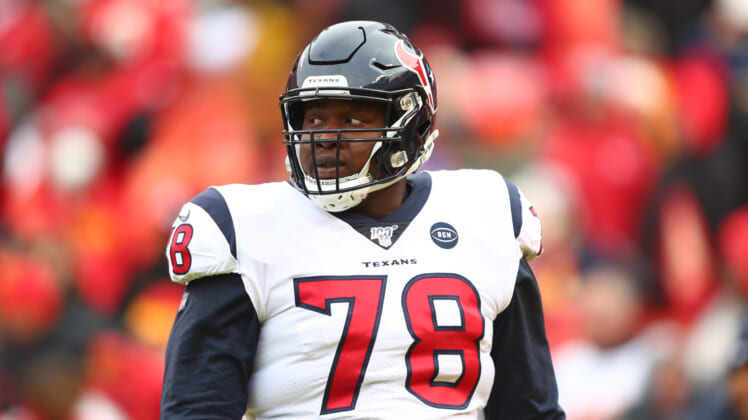 The Houston Texans traded two first-round picks and a second-round pick in 2019 to acquire offensive tackle Laremy Tunsil. Just a few years later, Tunsil could potentially be entering his last season with the Texans’ organization.

Houston paid a massive price for the Pro Bowl tackle, a decision made by former head coach and general manager Bill O’Brien. The rationale was that Tunsil would provide an elite pass-blocking lineman for quarterback Deshaun Watson, providing him with a cleaner pocket to start behind.

As the 2022 season fast approaches, Watson and O’Brien are gone with Tunsil the lone key figure left in Houston. The Texans kept him this offseason despite plenty of trade interest, but one of the NFL’s top insiders believes a blockbuster deal will happen within the next year.

Yahoo Sports’ Charles Robinson explained on the You Pod to Win the Game podcast that rising salaries for offensive tackles could lead to one of them being traded. Among the most likely names to eventually be moved, Robinson thinks Tunsil won’t be in Houston a year from now.

Houston doesn’t need to make a move right now. The franchise wants to use the 2022 season as an evaluation year for quarterback Davis Mills. The best way to evaluate the young passer is by putting him in the best position for success and a reliable left tackle is a crucial part of that.

Why a Laremy Tunsil trade could happen in 2022

However, money is a factor in every decision by a front office. Houston is perfectly happy with Tunsil’s cap hit for the 2022 season, especially since this is a transition year. After the season concludes, though, things get more complicated.

In regards to why Houston would trade its Pro Bowl left tackle, it comes down to cap management and prioritizing certain players over others based on projected costs.

“I think he is someone that, the next deal is a couple of years down the line, but I don’t think the Texans want to continue paying him what he’s making now for a couple more years and I definitely don’t think they’re going to want to pay him..of commanding nearly $30 million per year.”

Yahoo Sports’ Charles Robinson on why Houston Texans may trade Laremy Tunsil, via You Pod to Win the Game

We’re likely a year away from the best left tackles in the NFL making $30 million per season, a mark that Tunsil might push for in his next contract. Assuming that’s a price the Texans’ organization isn’t comfortable paying, it only makes sense to trade him for draft picks.

If Tunsil becomes available during the 2022 NFL season, there will be plenty of playoff teams and clubs with young quarterbacks interested in acquiring Houston’s top pass protector.