The New York Mets are off to a fantastic start in the 2022 season. Despite being without ace Jacob DeGrom for the entire season and losing big-ticket free agent Max Scherzer for over a month, the team still has one of the best records in baseball. Yet, that doesn’t mean this roster is beyond making improvements.

The team already has Scherzer back in the rotation and DeGrom is nearing a return but the team is still rumored to be targeting Cincinnati Reds starter, Luis Castillo. The Mets bullpen has been pretty good this season, but we have seen over the last 20 years how important bullpens become in the postseason. This means you can never have enough strong arms in that part of the staff.

Third baseman Eduardo Escobar has delivered in the power department, but he is still hitting near the Mendoza line and you want to limit unproductive outs in the batting order come playoff time. However, the catcher position has delivered much less in the lineup and 2021 free agent addition James McCann has had a horrid and injury-filled season. Improving the back stop spot might be a necessity from outside or within. 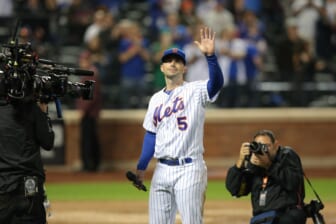 The designated hitter is another area in need of an upgrade and the team has been linked to possible deals for veterans Nelson Cruz and Trey Mancini. There are several ways the Mets could go before the August 2 trade deadline.

Here are three possible deals the New York Mets could make to increase their chances of bringing a World Series title back to flushing for the first time since 1986.

Chicago Cubs catcher Willson Contreras may be one of the most sought-after talents at the trade deadline as a top-flight rent-a-player before he heads into free agency. This means the Mets will have a lot of competition before Aug. 2 and they will need to give up some serious value from the minor leagues. However, if they really want to push for a chance at winning a championship, he would be the most fitting move to strengthen a position they have lacked offensive productivity from all year.

Some Mets fans might say top prospect and catcher Francisco Alvarez should be the answer. Unfortunately, Mets brass doesn’t want to throw their top prospect into a major pennant race and have to learn to catch an elite pitching staff in high-stress months. And I can’t blame them. Contreras would be perfect try to win now and save Alvarez for all of 2023 move.

Brandon Drury is having a career year for the Reds in 2022. At the midway mark, he already has or is on pace for career best stats in home runs, runs-batted-in, hits, doubles, runs, on-base percentage, average, and slugging percentage. His value is at an all-time high and there may be no better moment for the losing Reds to move him and get a pretty solid return.

While he can play multiple positions, bringing him back to New York — he played solidly in 51 games last year — to be in a 3B platoon with Escobar would be something fun for Buck Showalter to play around with. And if he ends up being the better player now, then they can ride his career year into the playoffs and let Escobar play the role of elite utility man.

The Detroit Tigers have been disappointing this season after hopes they could be a playoff contender in 2022. However, one area where they have been strong throughout the season is in the bullpen. And a player that has really excelled for them this year is 11-year veteran Andrew Chafin.

Outside of a couple of rough seasons, the man with the best handlebar mustache in the game has been steady and productive throughout his career. This year has been one of his best yet as he’s pitched to a 2.30 ERA, a 0.95 WHIP, and a 4.1 strikeouts to walk ratio. He would be a perfect middle and late innings addition that could be had for minor leaguers Jose Butto and Carlos Cortes.

The Baltimore Orioles’ hot play in July has thrown a massive wrench into any possibilities that they are sellers at the trade deadline. However, there is still a lot of time until Aug. 2, and with them being in a division with the best team in baseball — the New York Yankees — and two serious Wild Card contenders in the Tampa Bay Rays and Boston Red Sox, there is still a good chance they return to earth soon.

If the Orioles do falter in the weeks ahead, it would behoove them to move slugger Trey Mancini. He has an option for next season and is sure to pass on it so he can head into free agency on the back of his best seasons since his Cancer diagnosis in 2020. The seven-year veteran would be a fantastic addition to the Mets’ order as a DH and give them some extra thump in the order behind Pete Alonso.