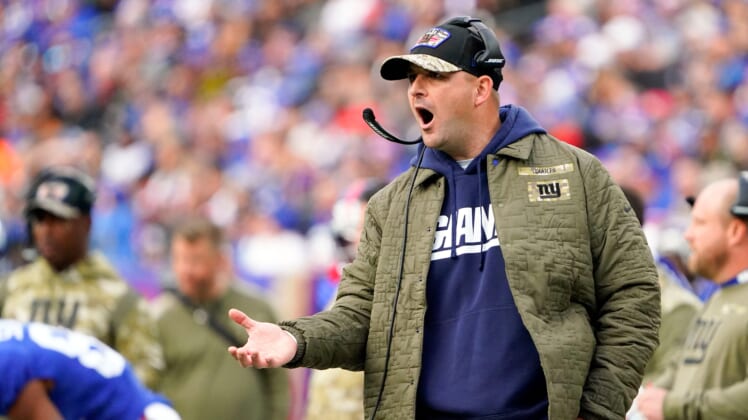 The 2021 season got off to a disastrous start for the New York Giants. Between injuries to key players and a 0-3 start, things looked bleak for New York in 2021.

While the injuries keep mounting, the Giants are beginning to turn things around. Entering the bye, head coach Joe Judge has kept his team focused and it resulted in a 3-3 mark over the last six weeks.

It’s never ideal to be 3-6 at the midway point of the season, especially for a franchise that has four consecutive seasons with double-digit losses. But at least New York is starting to show signs that it is making progress, which should give fans hope.

Here are the reasons why Giants fans should be optimistic for the remainder of the 2021 season.

One of the biggest disappointments at the start of the season was how poorly the defense was playing. In the first six games of the season, Big Blue’s defense was giving up an average of 29.5 points per game and sacked opposing quarterbacks just 10 sacks.

In their last three games, the defense is giving up just 13 points per game and has recorded nine sacks.

Patrick Graham’s unit will get a huge test following their bye week when they take on the high-powered Tampa Bay Buccaneers offense next Monday Night. But based on how they performed recently; you have to feel confident that the defense will be up to the task.

New York’s remaining schedule also offers reason for optimism. While it will be a fight to climb above the .500 mark, the games looming ahead at least offer the Giants a chance to be competitive on a regular basis.

Heading into Week 10, the Giants’ remaining opponents have a 27-32 record. Meanwhile, of New York’s mfour remaining division games, three will be held at MetLife Stadium.

We all know games aren’t played on paper and anything could happen on any given Sunday, but you can’t help to look at the remaining schedule and see that Big Blue has some favorable matchups.

As we mentioned, New York has dealt with a rash of injuries during the first half of the season. However, impact players like running back Saquon Barkley and promising left tackle Andrew Thomas are expected to return when New York hits the field in Week 11.

The offense has struggled mightily to this point of the season as they have yet to score 30 points in any game this year. This is due in large part due to the absences of Barkley and Thomas.

With the Giants’ left tackle back, Daniel Jones will have more time to find receivers downfield. With a dual-threat back in the lineup, New York’s offense is more dynamic. Rest assured, with the return of Barkley and Thomas to go along with Kadarius Toney and Kenny Golladay, New York’s offense will be tough for opponents to defend.