New York Giants general manager Dave Gettleman is running out of time for the roster he constructed to turn things around. Amid another disappointing season, it seems changes are looming for the Giants.

Gettleman, who took over in New York’s front office before the 2018 season, has overseen multiple coaches during his tenure. He hired Pat Shurmur before the 2018 season and saw the franchise finish with nine wins across two seasons. After firing Shurmur, Gettleman went against the consensus and hired New England Patriots special teams coordinator Joe Judge to become the Giants head coach.

Things haven’t worked out. While New York is coming out of the bye o a wins streak, it is still 3-6 on the season with slim hopes at an above .500 record or the NFL playoffs. While there is still time for the team to turn things around, The Athletic’s Dan Duggan indicates it might take a miracle for Gettleman to survive.

“If the Giants finish with a similar record to last season, Judge’s seat will be heating up at the same time a new general manager is coming on board. It’s a potentially messy corner the Giants have backed themselves into by sticking with Gettleman.”

It doesn’t come as a surprise that Judge is likely safe, even if the team finishes the season with seven or fewer wins. He signed a five-year contract in 2020 and John Mara likely doesn’t want to fire consecutive coaches after just two seasons into their deal. 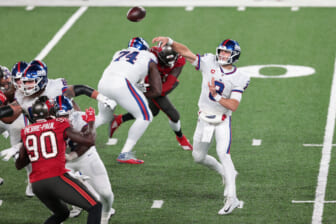 While Judge will likely get a pass, Gettleman is out of additional lives. He’s had no shortage of draft capital since joining the front office, but the hit rate on those picks is extremely low.

In the 2018 NFL Draft, New York spent the No. 2 pick on Saquon Barkley, the 24th pick on offensive guard Will Hernandez and a pair of top-70 picks on defensive linemen Lorenzo Carter and B.J. Hill.

Barkley has been outstanding when healthy, but the star running back has missed 21 games in the last three seasons and might not receive a contract extension. Drafted behind Barkley, All-Pro talents Quenton Nelson, Josh Allen, Minkah Fitzpatrick, Vita Vea, Derwin James and Jaire Alexander.

Hernandez is graded as the 56th-best offensive guard in the NFL by Pro Football Focus, Carter isn’t making an impact and Hill was traded for first-round bust Billy Price before the 2021 season. 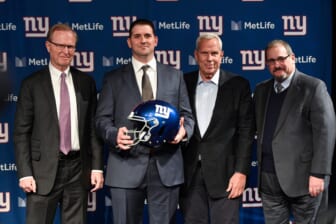 Holding three first-round picks in the 2019 NFL Draft, Gettleman didn’t fare any better. Daniel Jones is finally showing signs of progress, but hasn’t displayed the level of consistency to be a franchise quarterback. Dexter Lawrence, the 17th overall pick, is an above-average defensive tackle, and cornerback Deandre Baker (30th pick) is barely seeing the field for the Kansas City Chiefs.

As for the Giants’ 2020 draft class, the results aren’t ideal. Andrew Thomas, the first offensive tackle selected, isn’t playing close to the level of Jedrick Wills (No. 10 pick) or Tristan Wirfs (13th pick). While second-round pick Xavier McKinney is playing well, he is one of the few bright spots among Day 2 picks for the Giants.

Unfortunately for New York, moving on from Gettleman still creates a problem. Because ownership will likely want to keep Judge around, the next general manager won’t be able to pick his head coach until 2023 at the earliest. Barring a stunning turnaround, the Giants seemed destined for a prolonged struggle.