Is momentum building for a Nate Diaz vs Michael Chandler fight in July?

It is still unclear when Nate Diaz will return to the Octagon, however, in his latest attempt to finish the last fight on his contract, the Californian is angling for a fight with UFC 274 winner Michael Chandler.

It is closing in on a year since Diaz, 37, last fought in the UFC. His most recent appearance for the promotion was in a five-round non-title decision loss to top welterweight contender Leon Edwards at UFC 263. While he was outmatched for much of the bout by the talented Englishman, a final-round rally left his supporters itching for his next UFC fight.

However, despite Diaz’s very public pronouncements about making a fight happen, and ending his run in the UFC, it has been all quiet on the fight booking front. A matchup failed to materialize earlier this year between him and former title contender Dustin Poirier. The promotion seemingly wanted a fight against rising Russian star Khamzat Chimaev, but that too never came to pass for whatever reason.

Since nothing could be agreed to, Diaz has publicly bashed the promotion on several occasions. Including their April 20 (4/20) introduction of an NFT featuring him and his brother Nick. However, it seems that there could be a new option to help Diaz unshackle himself from the UFC chains.

Nate Diaz vs Michael Chandler at welterweight in July?

Following his destructive knockout win over Tony Ferguson on Saturday night, Michael Chandler suggested several names as future opponents, including Diaz. The Stockton native then tweeted soon after about the possibility of a fight at welterweight, and on July 30. “Iron” seemingly to agreed to the booking with a response tweet saying, “I’m there. Quick turn around. Spin your head on its axis. [Nate Diaz].” 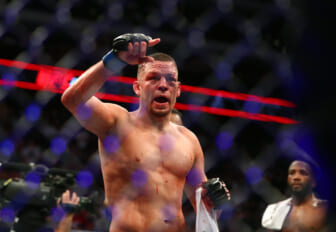 Also Read:
Nate Diaz slams ‘sorry a** UFC’ for marketing NFT’s of him and his brother on 4/20

It looks like the ball is in the UFC’s court and now Nate Diaz is putting pressure on the organization to make the fight happen and send over the paperwork.

“UFC got me on ice for a year now chandlers obviously ready to fight send a contract it’s time,” Diaz wrote in a Tuesday tweet.

When it comes to a Diaz fight it is hard to ever get hopeful one will get done. Diaz vs Poirier should have been a slam dunk booking yet that never happened. If the promotion truly prefers a Chimaev vs Diaz fight, then that may still likely be the route they go if they know Diaz will take his gloves and go elsewhere officially after finishing his contract.