Nate Diaz is no fan of the UFC selling NFT’s featuring him and his brother Nick, and marketing it to supporters of marijuana culture.

NFT’s, or non-fungible tokens, have become the rage over the last couple of years. Many of the world’s biggest sports brands have gotten involved in this latest revenue source, including the UFC. In January, the organization launched its “Strike” brand with Dapper Labs and jumped headfirst into this new market to sell digital copies of iconic moments and highlights for $50.

The promotion has a new Strike pack that features the popular cage fighting brothers Nate and Nick Diaz. The siblings from Stockton, California have had a plethora of memorable moments throughout their careers, and their legion of supporters is sure to fill up digital queues to wait for their chance to own an NFT of the duo.

Nate Diaz laments still being under contract to the UFC

Well, Diaz is no fan of this latest UFC money grab. The 37-year-old has just one fight left on his contract and has had a difficult time trying to secure a bout and end his tenure in the promotion on his terms. He has made his dissatisfaction well-known via his Twitter account in recent weeks and even requested his release at the end of March.

It should come as no surprise then that he slammed the promotion for their latest NFT using his likeness while he remains stuck in a contract he desperately wants to escape. In a Wednesday tweet, Diaz bashed the promotion for their latest “bulls**t” NFT that became available on April 20, or 4/20. Which has symbolic meaning in marijuana culture. A culture both brothers are a part of, which has led to problems throughout their careers with different state athletic commission guidelines.

“It’s s**t like this why I need to get the f**k out of the sorry a** UFC. Didn’t you guys suspend nick for 5 years and fine me hella money for a vape pen?! Now you’re reaping the benefits. I hope nobody buys this bullshit,” he wrote.

Nick Diaz’s suspension that kept him out of action for five years was not one handed down by the UFC, but by Nevada State Athletic Commission after he tested positive for marijuana multiple times during his tenure in the sport 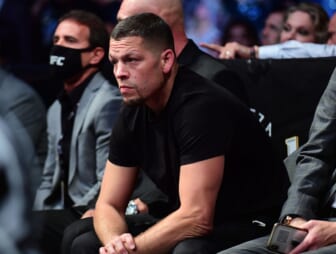 The younger Diaz brother has not fought since a five-round unanimous decision loss to welterweight title contender Leon Edwards last June. Nick ended his six-year hiatus from the UFC in September and came up short by technical knockout to former UFC welterweight champion Robbie Lawler.