NASCAR team trying for big return at Talladega in 2022

NASCAR has seen many organizations try to navigate the Cup Series without a charter but few last long overall. Which team is aiming for a return at Talladega? 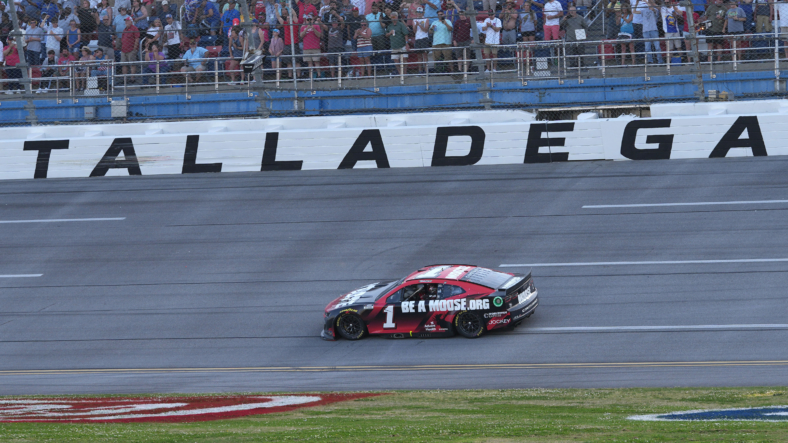 NASCAR has seen many organizations try to navigate the Cup Series without a charter but most of these organizations don’t last long due to the little payout and unreliability of the programs.

However, NY Racing Team is trying to make its return to the Cup Series at Talladega Superspeedway, per Jayski’s Dustin Albino.

NY Racing Team is trying to return for the NASCAR Cup Series race at Talladega Superspeedway; however, it was not the only race they were mentioned to push for this season.

It was said the organization was pushing for a return at Texas Motor Speedway with Greg Biffle as the driver of the No. 44 car but the team is not entered into the event as of Tuesday morning.

There were rumors circulating that the newly founded NASCAR team 3F Racing purchased the assets from NY Racing Team across social media over the last few months following the German team’s arrival.

There were attempts to contact the organization but there were no responses on whether there were any sales or plans to return to NASCAR during the 2022 season. Whether NY Racing Team truly returns at Talladega remains to be seen.

The organization’s last race came at Talladega on April 24, 2022. Biffle and the No. 44 car retired with a 35th place finish due to a fuel pump issue that plagued them in past events.

Biffle brought home a best finish of 20th place in the first race at Atlanta Motor Speedway on March 20. It was the only time the organization finished on the lead lap.

Also Read: Kyle Busch receiving interest from a team for the Indianapolis 500

It is a problem that has been faced by many teams. The idea of running a full season with a non-chartered entry is simply not something that can be done without financial loss.

The idea of 36 charters is beneficial for those teams that have one; however, the same concept is preventing teams to enter the sport who have major interest. There are two sides to the equation.

Once an organization spends the needed money for a charter it brings stability and makes them included in the so-called pie with 36 slices. But, the only way a team can enter the sport is if they buy one of those slices.

This is what happened with JTG Daugherty Racing. The organization previously ran Ryan Preece in the No. 37 car without a charter and the car folded at the conclusion of the 2021 season.

The argument could be made on why NASCAR should raise the charter limit to 40 entries. However, how is this fair for the organizations that have already bought charters? It feels difficult to make the needed changes.

Plus, it is the same problem Andretti Autosport is facing as they try to enter Formula 1. The organization tried to become the 11th team but that means the pie has more slices, which then creates smaller slices of profit.

The existence of teams with no charters has been dreadful to watch as plans turn into nothing. But, it is difficult to fix as charter prices are now exceeding $20 million. As of now, zero charters have been sold for the 2023 season.

However, Richard Childress Racing might lease or buy a charter for Tyler Reddick depending on what happens with his situation in the coming days, weeks, and months.

NASCAR faces some difficult decisions in the future when it comes to the possibility of expanding the charter limit and that likely comes with the new TV deal that is on the way.