Kyle Busch receiving interest from a team for the Indianapolis 500

Kyle Busch is interested in running the Indianapolis 500 and this team is already showing interest in allowing him to pilot one of its entries. 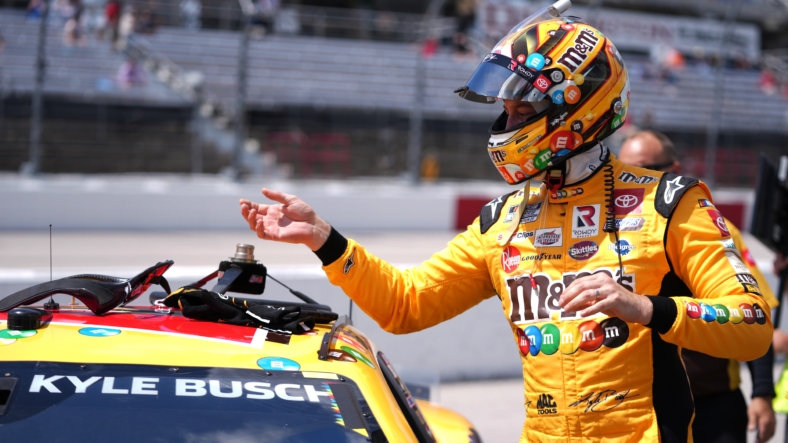 Kyle Busch signed with Richard Childress Racing to drive its No. 8 car in the NASCAR Cup Series; however, the news of Busch now being able to run the Indianapolis 500 might be the most notable item from the announcement.

It has also been noted by potential teams in the NTT IndyCar Series paddock.

Kyle Busch talks about the Indianapolis 500

Busch has been interested in running the double with the Indianapolis 500 and Coca-Cola 600 on the same day for some time, but it has been denied on multiple occasions while driving for Joe Gibbs Racing and Toyota Racing.

While Busch didn’t make it a priority during the process, he made sure that it was something included in his new contract if the opportunity ever came to fruition for him.

“I made sure that was in the deal. By all means, any IndyCar teams that are Chevrolet, call me up.”

Kyle Busch on being able to run the Indianapolis 500

The 37-year-old’s interest in the event has been high over the last decade after his brother, Kurt Busch, ran the 2014 Indianapolis 500 and came home with what should be a proud sixth-place finish.

There is much to love about the Indianapolis 500 and it is the biggest event in motorsports. It is not surprising to see another NASCAR driver show interest in running both events on the same day.

Jimmie Johnson has also shown interest in running both races and Trackhouse Racing team owner Justin Marks has been on record saying he would allow him to run the No. 91 car if he wanted to pursue that opportunity.

However, one of the major figures within those teams has already spoken out about the possibility of Busch running in one of its entries for the 2023 event.

Arrow McLaren SP is one of the best teams in the Indianapolis 500 and it showed that again when its three entries placed in the top-11 spots, including two in the top-4 sports during the 2022 event.

Sam Schmidt, co-owner of Arrow McLaren SP and founder of the initial organization, has already shown interest in letting Busch pilot one of his entries if that is truly of interest to him, according to the Las Vegas Review-Journal.

“I’d love to figure out a way to get (Kyle Busch) on my team – do you have his number?”

Sam Schmidt on Kyle Busch’s interest in the Indianapolis 500

The organization is one of the Indianapolis 500’s powerhouse teams so this would not be an opportunity for Busch to simply get in a car and run laps in the biggest event of the year.

Schmidt also talked about how Kurt Busch did well and it would be good for the sport to have another driver run the double.

“We saw how good his brother did, and I think it would be fantastic for IndyCar, the sport – we haven’t had a double for a while.”

Busch would get the opportunity to truly compete and go for the victory. It would be best to compete sooner rather than later before his driving abilities start to take the inevitable dive as they do for every driver.

Busch is not the only NASCAR driver who has been linked to the Indianapolis 500 as Hendrick Motorsports driver Kyle Larson wants to compete in the event over the next few years with a winning car.

There is a possibility that some of NASCAR’s greatest talents will join Johnson in competing in the Indianapolis 500 as early as the 2023 season and that should be exciting for race fans everywhere.

The Indianapolis 500 is an event that can change lives for any driver who drinks the milk in victory lane, as seen by Marcus Ericsson this year.