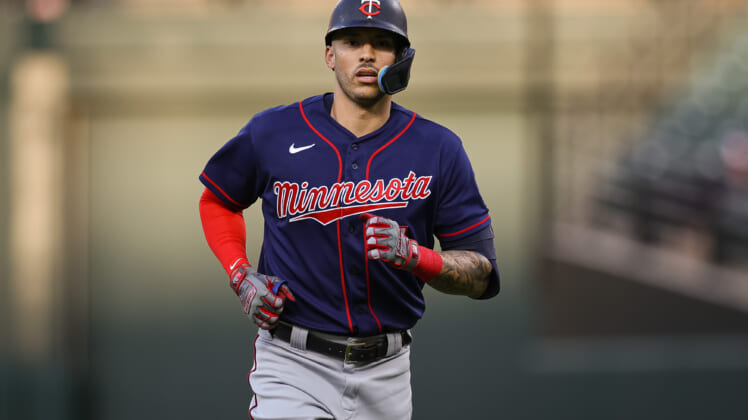 In perhaps the oddest MLB offseason to date, one of the top free agents on the market, Carlos Correa, waited until March 22 to sign his contract with the Minnesota Twins.

Correa signed a three-year, $105 million contract, with a player option to opt-out after each season. It was the largest annual salary amount the Twins have ever given to a player in their 121-year existence.

Typically when a player of Correa’s caliber hits the open market, he’s expected to sign with a big budget ballclub, but that’s not what happened in this case.

The Twins emerged out of nowhere after clearing Josh Donaldson’s salary off their books, paving the way to acquire Correa.

Suddenly the Twins had a Platinum Gold Glove shortstop cleaning up the infield, but his future in the Twin Cities may not be long-lived, according to some insiders.

Carlos Correa to opt out after just one season?

Once the true details of the opt-outs available in Correa’s new contract emerged, the assumption was the two-time All-Star would likely opt out and become a free agent once again next season when there won’t be a lockout to complicate matters.

According to Buster Olney of ESPN, that feeling hasn’t changed after a few months in a Twins uniform for Correa.

“There is an industry assumption that he’ll opt out of his contract and become a free agent.”

Noted. Yet, at the same time, the industry had no idea of Correa’s plans in free agency. The Twins were never even mentioned to be a suitor for his services. Why should we all suddenly buy into the ‘industry assumption’ this time?

Just 37 games into a 162-game schedule, it’s hard to definitively know what anyone may decide nearly a year from now.

Does Carlos Correa really want to leave MN after one year?

Meanwhile, a few weeks ago Correa noted his love for the state and the ballclub in general in an interview with Ken Rosenthal of The Athletic.

“I told ‘em, ’Hey guys, I know I have the opt-outs in the contract. But I really like it here, I love the people here. I love the way I’m treated here. … I would love to have a long-term relationship here if that’s what you guys would like.”

Carlos Correa on his time with Minnesota Twins, to The Athletic’s Ken Rosenthal (H/t to MLBTradeRumors.com)

Correa has said all the right things from the start since he landed in Minnesota. He caters to the locals, saying he loves ‘Jucy Lucys’, let’s not all start casting him away before he’s even played a quarter of the games.

There have even been suggestions he’s interested in opting out to sign an even longer contract with the Twins, depending on how the season goes.

Of course, there are 103 million reasons for Correa to suck up to the media, but from everything he’s displayed and said, there’s no reason to believe Correa will dart away the first chance he gets.

Impact of Correa potentially leaving after one season

Signing Correa came as a major surprise for several reasons other than the financials. For one, the Twins’ top prospect, Royce Lewis, is a shortstop. He was recently promoted to the big-league club due to Correa’s finger injury.

There’s nothing to suggest the 22-year-old ballplayer isn’t ready for a healthy amount of plate appearances, yet the team just sent him to the minors, causing a mini fracas among the Twins’ fanbase.

The issue with Lewis is that there’s nowhere else to play him every day. He needs to continue gaining experience as a shortstop, and with Correa around, that just won’t happen in the majors.

Even after Lewis, the No. 2 ranked prospect in the system, Austin Martin’s best position may also be at short.

This future logjam either sets up the Twins with a chance to unload some of their shortstop prospects for other assets, but they cannot afford to do so without understanding Correa’s standing with the team. It’s a tricky situation, but the top goal is to collect talented ballplayers, so it’s not a bad problem to have, it’s just uncertain.

No matter what, the Twins appear to have a shortstop of the future on their 40-man roster, the biggest question is whether that’s Correa or Lewis. No one is going to push out perhaps the best shortstop in MLB for an unproven thing, in Lewis.

Even though Correa hasn’t gotten off to a blazing start in his new digs, he’s maintained a positive attitude while exemplifying top-notch teammate behavior, giving the Twins a valuable member of the clubhouse.

There’s no reason to try and trade, or not retain him if he does opt out, yet the Twins have a top prospect ready to go, no matter what Correa decides. They’re in good shape at shortstop now and for the future.