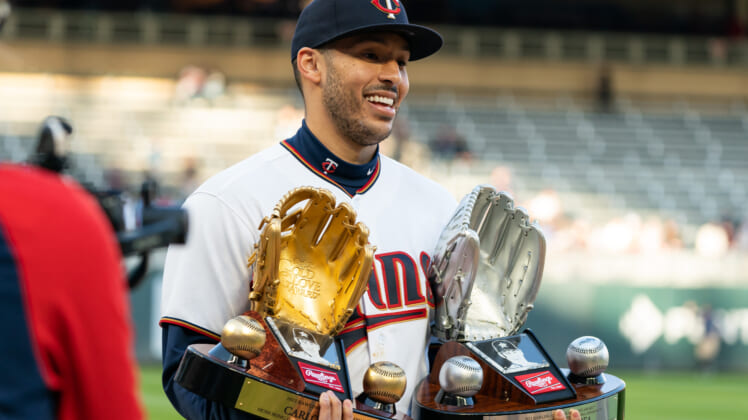 After shocking the entire baseball community by signing with the Minnesota Twins on a three-year, $105 million contract, superstar shortstop Carlos Correa hasn’t gotten off to the start he imagined when signing with a new ballclub. Still, despite hitting just .192 across 59 plate appearances, Correa isn’t letting a slow start harsh the vibes in his new digs.

Instead, according to Ken Rosenthal of The Athletic, Correa could be looking to sign an even longer-term extension aimed at keeping him in the Twin Cities past the 2024 season.

As of now, Correa has a player option to opt out of his deal at the end of the 2022 baseball season, which has led many to believe that he’s basically destined to become a free agent again this winter.

While an extension for Correa doesn’t appear to be around the corner any time soon, both the Twins and the Platinum Gold Glover winner’s camp seems interested in getting a new deal done. Perhaps this will erase the rumors of him having his eyes on hitting free agency once again after what he hopes will be another strong season.

Despite a less than ideal beginning to the 27-year-old’s career with the Twins, it’s important to note how the weather has yet to warm up with the team playing in many cold, damp atmospheres in their first 16 games. Not to mention, scoring averages have been down across baseball as a whole in 2022.

Yet they are still in first place of the AL Central, so if Correa’s wish is to compete and help Byron Buxton lead the Twins back to the playoffs, he appears to be in the right place.