Doncic, 22, dropped 39 points on 16-of-29 shooting while adding seven rebounds and seven assists. His only blemish was seven turnovers in a 127-121 win over a favored Clippers squad. This was more than enough to counteract the 41 points Leonard scored on an efficient 14-of-22 shooting from the field.

Dallas now leads the best-of-seven series 2-0 heading back to Big D for Game 3 on Friday evening. For Luka Doncic and Co., it’s a chance to pretty much end the series while avenging last season’s loss to the Clippers in the Western Conference Finals.

For Los Angeles, another loss on Friday would place into question its status as a top-end title contender with Leonard and Paul George leading the charge. A first-round exit against a team many deemed to be vastly inferior to the Clippers could also lead to Leonard’s premature departure from Los Angeles after just two seasons with Doncic acting as a major component in it all.

Luka Doncic playoff stats: Stepping up when it counts the most

Outside of shooting struggles in Game 3 of their series against the Clippers last season, Doncic has stepped it up when it counts the most in the postseason.

The eight career playoff games the young NBA MVP candidate has played throughout his career are a prime example of this. Including a 31-point performance in Game 1 this past weekend and Tuesday’s 39-point outing, Doncic’s averages and splits are something else.

Sure it’s just an eight-game sample size, but Luka Doncic has been otherworldly in his playoff games against the Los Angeles Clippers.

That’s going to be cause for alarm with the Clippers now having to head to Dallas where the young guard dominated during the regular year. Doncic averaged 28.9 points, 8.4 rebounds and 9.2 assists on 47% shooting from the field at American Airlines Center during the regular season.

Los Angeles Clippers don’t have an answer for Luka Doncic

Whether it was Kawhi Leonard or Paul George on Doncic over the first two games of the series, the Clippers struggled containing the Slovenian.

If these two are not able to even hold Doncic in check, this series won’t last long. Again, that has not yet been the case through two games.

Tim Hardaway Jr. was second on the Mavericks in scoring back in Game 1 behind Luka Doncic, dropping 21 points. He followed that up by scoring 28 points on 9-of-14 shooting while hitting six three-pointers Tuesday night.

After getting some criticism for his performance in the series opener, Kristaps Porzingis went for 20 points on 8-of-12 from the field. The two were a combined plus-23 when on the court. 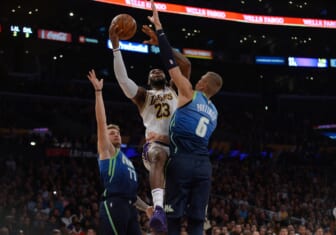 Los Angeles stands no real chance to overcome a 2-0 series deficit if these two are stepping up behind Luka Doncic like this, especially if the latter continues his dominating overall play.

It was reported recently that Kawhi Leonard could realistically depart the Clippers in free agency if they were to prematurely exit the playoffs. While not necessarily likely, bombing out in the first round could have the future first ballot Hall of Famer rethinking his career in Southern California.

Leonard, 29, will opt out of his $31.12 million salary for next season and become a free agent. Obviously, multiple contending teams would have interest in his services should the forward explore his options during the summer.

As for the remainder of the Clippers and their long-term future, it’s not great. Other teams hold the rights to their next six first-round selections, via either pick swaps or outright compensation.

That’s no way to go through a retooling process, even if Leonard returns next season. Losing in the first round of the NBA Playoffs would add another layer to this. And in reality, Luka Doncic would be the primary culprit.