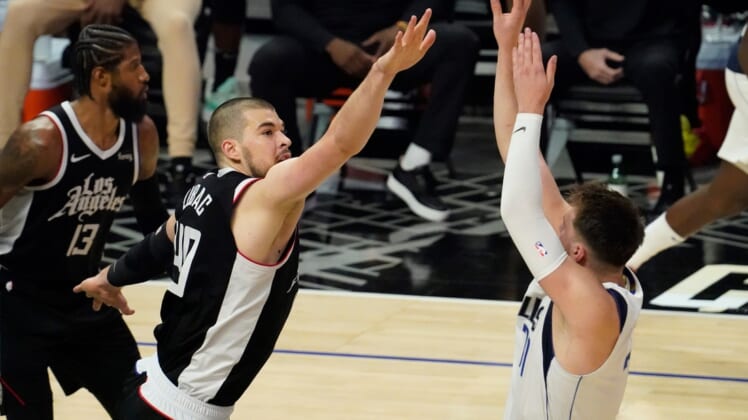 Dorian Finney-Smith hit two late 3-pointers, one triggering a 7-0 burst that broke a tie and propelled the visiting Dallas Mavericks to a 113-103 victory over the fourth-seeded Los Angeles Clippers in Game 1 of their Western Conference first-round playoff series on Saturday afternoon.

Game 2 in the best-of-seven is scheduled for Tuesday, also in Los Angeles.

Hitting four of his five 3-point attempts, Finney-Smith finished with 18 points, while Luka Doncic had a game-high 31 as part of a triple-double and Tim Hardaway Jr. 21 for the Mavericks, who won the season series 2-1 over the Clippers.

Kawhi Leonard had a team-high 26 points and Paul George scored 23 for the Clippers, who beat Dallas 4-2 in a first-round series last year in the bubble.

After the Mavericks, up by as many as 12 in the first half, held a lead for almost the entire first 39 minutes of the game, Nicolas Batum and George buried consecutive 3-pointers to put the Clippers on top 89-87 with 9:00 remaining, setting up a tight finish.

Finney-Smith’s first crucial 3-pointer came during a stretch in which the Mavericks and Clippers exchanged leads seven times over the course of 4:12. His shot gave Dallas a 95-94 advantage with 6:55 left. 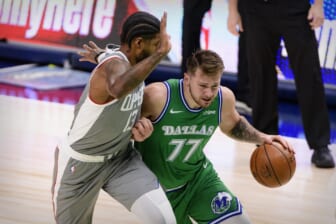 The Clippers rallied to go up by as many as three, and a George jumper with 3:12 remaining forged the game’s final tie at 100 all before Dallas made its last surge.

Finney-Smith’s second 3-pointer broke the tie with 2:50 remaining, after which Kristaps Porzingis added two free throws and Hardaway a layup to complete the seven-point run and put the Mavericks in charge at 107-100 with just 1:24 to play.

The Clippers got no closer than five after that.

Doncic and Hardaway bombed in five 3-pointers apiece as the Mavericks outscored the Cli(ppers 51-33 from beyond the arc.

Doncic completed his triple-double with a game-high-tying 10 rebounds and a game-high 11 assists, while Jalen Brunson chipped in with 15 points and Porzingis 14 for Dallas.

Leonard completed a double-double with a team-high 10 rebounds.

Batum and Rajon Rondo both came off the bench to contribute 11 points to the Los Angeles offense, while Patrick Beverley added 10.