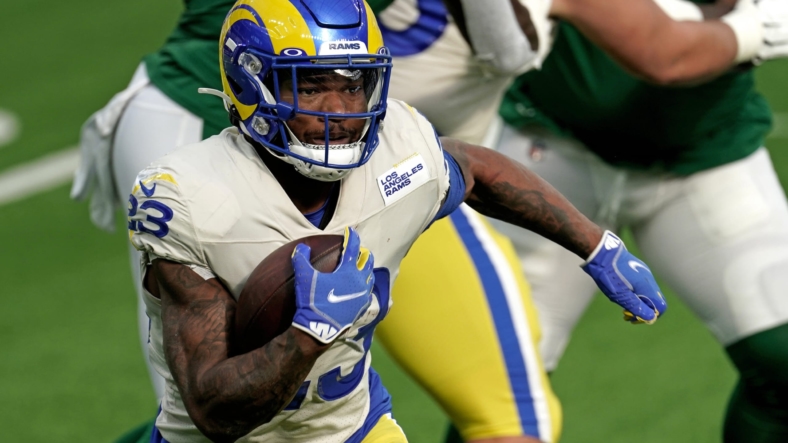 There were a lot of things to be disappointed about in the Los Angeles Rams’ Week 1 performance versus the Buffalo Bills, and one player that got singled out this week for their poor showing on Thursday was running back Cam Akers.

There is no other way to say it — the defending Super Bowl champion Rams were just not good on Thursday night in the kickoff game to the 2022 NFL regular season. Quarterback Matthew Stafford did little to diminish concerns about his elbow, as he threw three interceptions in the game and his Bills counterpart Josh Allen made things look easy at times against the LA defense. As he completed 84% of his passes and accounted for four of Buffalo’s touchdowns.

However, while Stafford and the passing game — outside of superstar Cooper Kupp — left much to be desired, it still paled in comparison to the poor showing from the running game. While the Rams’ bread-and-butter is their passing attack, they still need help from their running backs. Starter Darrell Henderson Jr. had just 47 yards on 13 carries, and Cam Akers offered up even less as his early performance only led to 12 snaps on Thursday.

Los Angeles Rams head coach on Cam Akers: ‘We want to see an increased level of urgency and accountability’

Akers in particular was a subject of conversation at head coach Sean McVay’s press conference on Friday, as he expressed his frustration with the 23-year-old’s showing this week and lack of “urgency,” because the coach sees a great deal of potential in the 2020 second-round pick.

After a solid showing in his rookie season where he ran for 625 yards, added another 123 yards in the passing game, and scored three total touchdowns, injuries limited Akers to just one game last season. There are high hopes for the Florida St. alum, but he certainly did not get off to a strong start in Week 1, and his head coaching is letting him know it.