Despite recent rumors to the contrary, a new report claims that the Los Angeles Lakers do not have any interest in pursuing a trade for New York Knicks forward Julius Randle. Even for the chance to ship out Russell Westbrook.

On Tuesday, a story that was overshadowed by the monumental news that Kevin Durant and the Brooklyn Nets had worked out their issues and that he would be back in New York next season, were reports that the team also stopped taking trade offers for Kyrie Irving. While most teams around the league had no desire to add the talented headcase that is Irving, the Lakers were certainly one team disappointed by the news.

Los Angeles is severely limited in what they can do this offseason. They don’t have first-round draft picks until the back half of the decade, they don’t have many good trade chips, and Russell Westbrook’s swap value is at an all-time low after a horrendous debut season in LA. Irving was the one major move they could make as they traded their problem child for the Nets’. However, with that not being an option what else is possible?

Beyond the rumors of a possible deal with the Indiana Pacers for Myles Turner and Buddy Hield, one name that has been floated this summer as a possible addition to the Lakers is one-time All-Star Julius Randle. The Knicks are open to moving their top player after a notable step back in his production last season.

Considering how massive some NBA contracts are, Randle’s is not terrible with three seasons left and a peak annual salary of $29 million in 2025-2026. The 2020-2021 Comeback Players of the Year also has a history with the Los Angeles Lakers after the organization selected him with the seventh pick overall in the 2014 NBA Draft.

However, despite the team’s strong desire to move Westbrook — who would be sent to New York in a prospective deal –, The Athletic’s Jovan Buha reported on Wednesday that LA doesn’t see a fit in a Randle reunion. 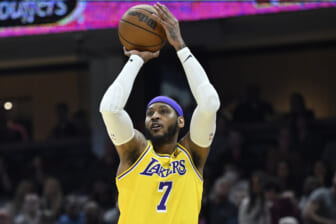 For Knicks fans hoping to see Julius Randle moved to open up more playing time for talented big man Obi Toppin, this will surely be disappointing news. However, the thinking of the Los Angles Lakers does make sense. While Westbrook’s massive $42 million contract this season drags down their salary flexibility now, it will be off the books after this season.