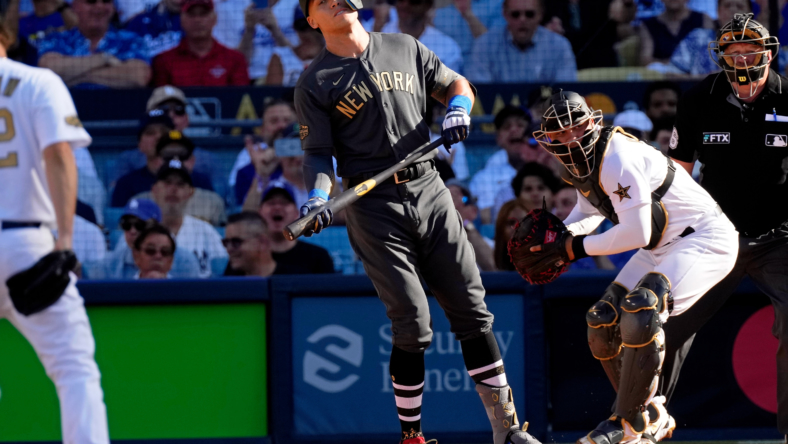 The Los Angeles Dodgers and San Francisco Giants have done battle on the diamond since all the way back in 1890 when both were based out of New York City.

More than 130 years later, the two National League West rivals could do battle on a completely different playing field. That is to say, challening one another for the rights to throw hundreds of millions in the direction of American League home run king Aaron Judge.

We already know that San Francisco has been linked to the New York Yankees superstar and impending free agent. Now, it appears that the Dodgers are planning on joining this sweepstakes.

“According to sources, the Dodgers could become serious players in this offseason’s Aaron Judge sweepstakes, a move that would potentially result in a position change for Betts, a six-time All-Star outfielder.”

The first point that must be made here is the presence of Mookie Betts in right field for the Dodgers since they acquired him in a blockbuster trade with the Boston Red Sox ahead of the 2020 season.

For the most part, Judge played center for the Yankees this past season. But historically, he’s been an everyday right fielder. According to the report of Los Angeles’ interest in New York’s star, Betts would be willing to move to another position. That includes second base.

It is a position he has played sparingly since entering the Majors back in 2014. Though, this was Betts’ primary position in the minors.

Beyond all of that, Los Angeles’ interest in Judge shouldn’t be considered too surprising. Here’s a look at the factors that could lead to him heading from the Bronx to Southern California.

Los Angeles Dodgers have the cash to sign Aaron Judge

This past regular season saw Los Angeles boast the second-highest payroll in baseball at $275.63 million, behind only the New York Mets. Dodgers co-owners Mark Walter and Todd Boehly are said to have a combined net worth of roughly $10.5 billion.

As for the Dodgers’ payroll, there’s multiple moves they could make to bring Judge into the mix regardless of his market. Letting the likes of Trea Turner, Justin Turner, Craig Kimbrel and Joey Gallo leave as free agents would save an estimated $100 million. Right now, Los Angeles is projected to have a 2023 payroll about $116 million less than this past season.

Judge is projected to land a massive contract in free agency that could pay him $40 million per season over 10 years. There’s very few teams that can make a play if those finances ring true. The Dodgers are obviously one of them.

Does Aaron Judge make sense for the Los Angeles Dodgers?

Judge makes sense for any team with a heartbeat. But there’s better fits than others. It seems as if adding another power bat to the lineup would be a luxury move for the Dodgers. But that’s just on the surface

Despite winning 111 games during the regulars season, Los Angeles fell to the division-rival San Diego Padres in the NLDS. That series saw Los Angeles score only 12 runs while boasting a .227 batting average in four games. Perhaps, this has something to do with their thought process.

Coming off a 2022 campaign in which he broke the American League home run record, Judge is going to be a wanted man this winter. If the Los Angeles Dodgers have legitimate interest in him, they become a realistic landing spot.