The Las Vegas Raiders’ new regime led by general manager Dave Ziegler had a day of tough decisions with final cuts, but the front office sent a clear message to the players. Regardless of how someone initially made the roster, team brass would assemble the best 53-man depth chart for the 2022 season.

Las Vegas jettisoned offensive lineman Alex Leatherwood before his second season and traded cornerback Travon Mullen to the Arizona Cardinals, which stood out as the biggest moves on Tuesday for the Silver and Black.

We’ll likely see some additions and subtractions in the coming days, but before Ziegler and company continue to tinker with the roster, let’s break down each position and the potential roles for the players.

Chase Garbers didn’t make the roster as the third quarterback, though he could become a developmental player who sticks around similar to Nathan Peterman during Jon Gruden’s years with the team. He can make some plays with his legs, which makes him a valuable asset at practice and a fun player to watch. 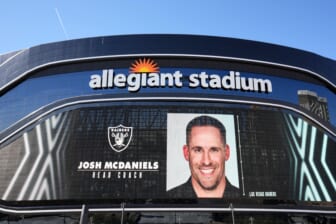 Vegas’ ground attack will likely feature a one-two punch with Jacobs and White on the ground. Abdullah and Bolden probably share pass-catching duties.

Brown made the initial roster, though the Raiders probably won’t dress five running backs on game days. He could see some touches if someone gets hurt or head coach Josh McDaniels goes with a run-heavy game plan against an opponent with a weak interior defensive front.

In the preseason, Brown recorded 34 carries for 152 yards and two touchdowns and seven receptions for 37 yards. The front office may have thought that another team would claim him off waivers because of his high-level performances in the exhibition games. He rounds out a loaded running back room that should rank higher in rushing yards than last year (28th) if the offensive line has a decent season.

Adams and Renfrow will see the majority of targets at receiver.

Hollins will play a big role on special teams, and he can serve as a red-zone target at 6’4”, 221 pounds. He’s going to remind you of Andre Holmes but with a bigger personality at the podium.

Johnson and Turner edged out Keelan Cole, whom the Raiders cut Tuesday.

Johnson has the top-gear speed that the other players at the position cannot match on the field. He can make a big play on any given passing down, and the Raiders can use that explosiveness to open up the aerial attack.

According to CBS Sports’ Josina Anderson, the Raiders have discussed an extension with Waller that would make him the highest-paid tight end in new money ($16 million annually).

Last week, Waller fired his sports representation agency (Klutch Sports), per Liz Mullen of the Sports Business Journal. According to The Athletic’s Vic Tafur, he’s going to hire Drew Rosenhaus, who’s known for negotiating big-money deals on behalf of his clients. The star tight end will likely sign for some sort of pay raise before Week 1.

When Waller isn’t 100 percent, Moreau can take on a big role, but don’t sleep on Horsted, who had a good showing through the preseason as a run-blocker and pass-catcher, hauling in all seven of his targets for 108 yards.

Here’s a prediction to take to the bank: the Raiders will add another offensive lineman before Week 1.

Vegas waived Leatherwood and released Alex Bars. Munford hasn’t practiced since he suffered an undisclosed injury before the team’s Week 2 preseason game with the Miami Dolphins.

Per the MMQB’s Albert Breer, Munford impressed the Raiders’ coaching staff, and he’ll push for the starting job at right tackle upon his return to action:

Cotton could start, but Parham and Simpson would be a better duo at guard to start the season.

Ziegler has more work to do here. Expect at least one addition soon even if McDaniels feels comfortable with the eight linemen currently on the roster.

The Raiders are one interior defensive lineman short (Ndamukong Suh?) of a strong odd-man front.

Farrell and Billings can stop the run though Butler had an underwhelming preseason until the last exhibition game against the New England Patriots. Vickers could be solid, but Ziegler can afford an upgrade in the third spot for three-man defensive fronts.

Once the front office extends Waller, it may circle back to free-agent options for the defensive line with enough to pay a quality veteran. If Suh is willing to sign with a team for $6-7 million, he’s going to have several suitors, and the Raiders should be one of them.

Vegas has underrated depth on the edge with Koonce and Bower; both had standout performances through the preseason. The former looks like a second-year breakout candidate.

Even if Ferrell doesn’t find his way under his third defensive coordinator, Koonce and Bower should be able to handle mop-up duty behind Crosby and Jones in pass-rushing roles.

Nonetheless, Ferrell’s versatility as an interior defender and edge-rusher has value in defensive coordinator Patrick Graham’s scheme. He’s not going to play up to the expectations of a top-five pick, but he can become a backup contributor in this system.

As a pair of undrafted rookies, Masterson and Butler earned their spots, which underscores the coaching staff’s objective roster evaluation.

Masterson and Butler will make most of their impact on special teams this year, though both linebackers showed they can support the run as downhill defenders. The former picked off Patriots quarterback Mac Jones in the final week of the preseason, so he may have decent hands in coverage as well.

Mullen’s exit may open up a spot on the boundary for Nate Hobbs.

As a collegian at Illinois under Lovie Smith, Hobbs played on the outside, and he moved to the slot for his rookie season under former defensive coordinator Gus Bradley.

Over the summer, Hobbs battled with wideout Davante Adams at practice and took eight snaps on the outside and two snaps in the slot during the Hall of Fame Game against the Jacksonville Jaguars, per Pro Football Focus.

Hobbs can play on the boundary in base formation and in the slot within the nickel alignment. If he excels at both positions, the 2021 fifth-rounder could move toward stardom in the coming years.

If the Raiders don’t showcase Hobbs in an inside-outside role, Averett will be a full-time starter on the outside. Surprisingly, the coaching staff kept Robertson, who has inside-outside versatility but needs to elevate his play overall. Webb had a strong showing in the preseason and made the roster as an undrafted rookie. He’ll earn his keep on special teams.

Vegas may add a veteran cornerback to replace Mullen.

Abram played sparingly in the preseason, but Graham used him on blitzes, which is an encouraging sign to see because of the safety’s ability to seek and hit at or behind the line of scrimmage. He just needs to cut down on missed tackles (10.8 percent last year).

Like Hobbs, Moehrig could rise to stardom after a promising rookie campaign. Harmon will  play both safety spots in a reserve role.

Pola-Mao is the surprise keeper within the safety group. He flew around the field in the exhibition games, logging 10 tackles, though the roster seemed set with four safeties.

At 6’4”, 211 pounds, Pola-Mao can be a thumper in the box, though he also snagged four interceptions in his 2019 sophomore term at USC. The undrafted rookie has a good teacher in his uncle, Hall of Fame safety Troy Polamalu.

If the Raiders broke up this three-man band, we would justifiably riot. But they didn’t, so all is well with an elite special teams trio that features an All-Pro punter, a kicker who’s converted at least 93 percent of his attempts for the 2020 and 2021 seasons and a reliable fifth-year long snapper.