The Las Vegas Raiders are getting slammed with injuries to start the 2021 NFL season, as backup quarterback Marcus Mariota is the latest to go down after aggravating a quad injury in Week 1’s thrilling Monday night win over the Baltimore Ravens.

According to NFL Network’s Ian Rapoport, Mariota was hurt during his electrifying 31-yard run versus Baltimore:

It was a struggle for Las Vegas to run the ball against the Ravens, especially while breaking in four new starters on the offensive line. Quarterback Derek Carr wound up throwing for 435 yards in the 33-27 overtime victory, as tailback Josh Jacobs was hobbled throughout and limited to 10 carries for 34 yards.

Mariota provided a spark to the rushing attack that, it seems, Raiders coach Jon Gruden seemed intent on deploying in the coming weeks. Unfortunately, that unique element to the offense will have to be shelved for now while Mariota recovers.

Week 1 may prove to be a Pyrrhic victory for Las Vegas in light of how many players went down. In addition to Mariota, starting guard Denzelle Good and defensive tackle Gerald McCoy suffered season-ending knee injuries, and star pass-rusher Yannick Ngakoue is dealing with a hamstring issue.

The Raiders’ defense held up better than expected, especially considering the team fell behind 14-0 in the season opener.

As for what Mariota’s absence means going forward, well, Las Vegas’ o-line really needs to jell quickly. Week 2 presents an extremely tough test on the road against the Pittsburgh Steelers‘ elite defense. Miami, the Los Angeles Chargers, Chicago and Denver are on the schedule next. It’s not going to get any easier.

If they’re forced to be as one-dimensional on offense as they were in Week 1 in the coming contests, it’s unlikely the Raiders will be able to hang with their next several opponents. 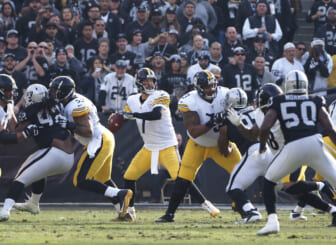