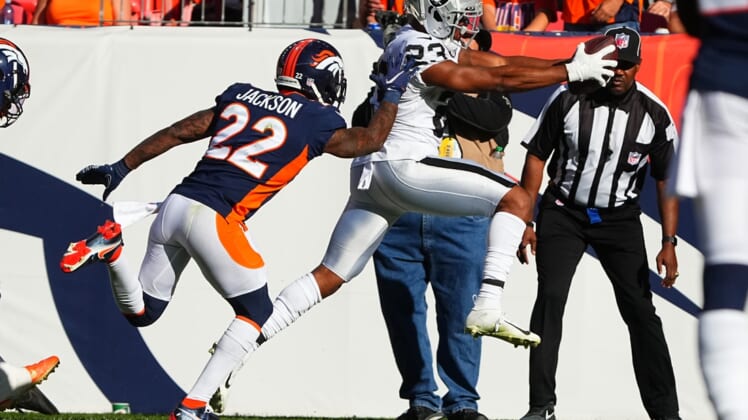 Derek Carr was 18-for-27 passing for 341 yards and two touchdowns, Kenyan Drake had a touchdown run and catch, and the visiting Las Vegas Raiders beat the Denver Broncos 34-24 on Sunday.

Henry Ruggs III had three catches for 97 yards and a touchdown and Josh Jacobs ran for another for Las Vegas (4-2).

Teddy Bridgewater was 35-for-49 passing for 334 yards, three touchdowns and three interceptions, Noah Fant had nine catches for 97 yards and a score. Courtland Sutton had eight receptions for 94 yards and a touchdown for Denver (3-3).

The Raiders were playing their first game since Jon Gruden resigned as head coach after offensive emails were made public last week. Rich Bisaccia was elevated to interim head coach.

Las Vegas went ahead 7-0 just 3:06 into the game on Carr’s 48-yard TD pass to Ruggs. The Broncos answered on the ensuing drive with Bridgewater’s 23-yard touchdown strike to Tim Patrick.

Daniel Carlson’s 50-yard field goal gave Las Vegas a 10-7 lead but he missed from 43 yards after Bridgewater threw an interception.

After five punts, the Raiders struck just before halftime. They got the ball at their own 18-yard line with 1:01 left, and after two short completions Carr hit Darren Waller for 36 yards. That set up a 31-yard TD pass to Drake with 30 seconds left.

Denver managed just one yard on its first possession of the second half and Las Vegas answered with another score. The Raiders got the ball on their 44 and needed just four plays to score, with Drake running the final 18 yards to make it 24-7.

The Broncos responded with a 32-yard field goal by Brandon McManus to cut the lead to two touchdowns but Jacobs scored on a 3-yard run to make it 31-10 at the end of the third quarter.

Bridgewater made it a 10-point game with a 4-yard TD pass to Fant.