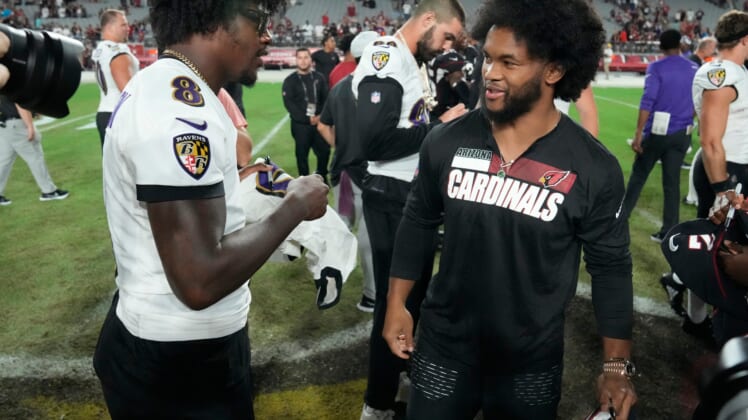 The Baltimore Ravens would love to get their franchise quarterback and former league MVP Lamar Jackson signed to a contract extension before the regular season gets underway. It’s not that they’re concerned about their QB walking away once his contract expires at the end of the season, but it’s easy to understand how much better everyone would feel once their face of the organization is locked in for a few more seasons.

Jackson, who doesn’t have an agent, meaning he represents himself in discussions, would also like to retire as a member of the Ravens, the only NFL team he’s known since becoming the 32nd pick in the 2018 NFL Draft.

But that doesn’t mean a deal will get done tomorrow. While both sides are working toward reaching an agreement, Jay Glazer of Fox Sports called the negotiations an “uphill battle” to strike a deal.

Related: Baltimore Ravens ‘willing’ to give Lamar Jackson massive contract, why a deal is still unlikely

Why is Lamar Jackson’s contract taking so long?

Though Kyler Murray may have been the quarterback who most recently signed a massive extension with his five-year, $230 million contract, it’s not his fault Jackson has yet to reach a new deal. According to Glazer, the Ravens have offered Jackson even more money than Murray received.

However, it’s actually the contract Deshaun Watson signed with the Cleveland Browns that appears to have complicated contract negotiations between Jackson and the Ravens’ front office. The Browns famously handed Watson a five-year, fully guaranteed contract worth $230 million. While the dollar amount is the same as Murray’s, it’s the fully-guaranteed portion that the Ravens, and many other teams take issue with.

Here are the comments Ravens owner Steve Bisciotti made after Watson signed the deal back in March.

It’s clear Bisciotti isn’t happy with the fully guaranteed portion of Watson’s deal, and maybe that’s been a sticking point for Jackson all along. Unlike Watson, Jackson actually has won an MVP award. So if Watson’s worth a fully-guaranteed contract, shouldn’t Jackson be worth a similar amount, if not more?

For now, the benchmark seems to be the $230 million amount, and that’s expected to be in the same range Jackson will receive once the deal does finally get done. But from the sounds of it, don’t expect it to also be fully guaranteed, as the guy who signs the checks doesn’t seem to like that idea.

Meanwhile, Jackson has said he’d like to have his contract discussions wrapped up before the Ravens begin the regular season on Sept. 11. Stay tuned.