Atlanta Falcons wide receiver Julio Jones reportedly has the Tennessee Titans as one of his preferred destinations after he took to the media to guarantee he will not be returning to Atlanta for an 11th season.

Just imagine what a pairing of Green and stud young receiver A.J. Brown might look like for the Titans should a move come to fruition.

Hilariously, Brown took to TikTok on Wednesday as a way to recruit Julio Jones to Nashville. It’s the best thing you’ll see all day.

That’s one heck of a recruiting pitch. It included Brown going between calling himself a big deal and downplaying his success after two seasons.

A native of Alabama, the south has pretty much been Julio Jones’ home since he first starred at Foley High School in the Yellowhammer State before playing for the Crimson Tide.

Where is Julio Jones going to land?

In addition to the Titans, it’s being reported that the seven-time Pro Bowl receiver is interested in joining Cam Newton with the New England Patriots. Meanwhile, the San Francisco 49ers are betting favorites to land the future first ballot Hall of Famer. Head coach Kyle Shanahan, who worked with Jones in Atlanta from 2015-16, didn’t deny interest in Jones earlier this week.

Coming off an injury-plagued 2020 season in which he missed seven games to continued hamstring injuries, Jones has recorded an average of 85 receptions for nearly 1,300 yards throughout his career. 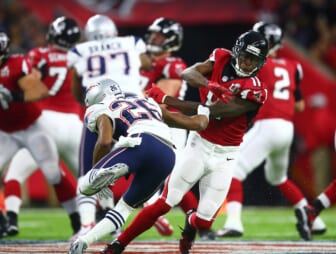 Complicating things a bit is the fact that Jones will turn 33 during the 2021 NFL season and is set to count roughly $15 million against the cap for an acquiring team.