There’s a decent chance that star wide receiver Julio Jones will land with the San Francisco 49ers in a blockbuster trade with the Atlanta Falcons here soon.

49ers head coach Kyle Shanahan stopped well short of dousing trade rumors connecting Jones to San Francisco. Rumors might have become reality on Monday when Jones told Fox Sports 1 he was “out of there” with regard to his time with the Falcons.

Shanahan also spoke to the media during the first day of San Francisco 49ers organized team activities on Tuesday, touching on the Julio Jones trade rumors in the process.

The 49ers made a big splash in the offseason by trading up for the No. 3 pick in the 2021 NFL Draft and selecting North Dakota State quarterback Trey Lance.

San Francisco has been active and regularly engaged in the veteran trade market during general manager John Lynch’s tenure, including the 2017 midseason acquisition of quarterback Jimmy Garoppolo and the ill-fated trade for Dee Ford.

Despite rumors suggesting that Jones would prefer a trade to the New England Patriots or Tennessee Titans, San Francisco remains the Vegas favorites to land the seven-time Pro Bowl receiver (via William Hill).

In terms of a potential fit, Shanahan worked with Jones in 2015 and 2016 when he was the Atlanta Falcons offensive coordinator. In fact, the future first ballot Hall of Famer put up his best two-year run under Shanahan — catching a combined 219 passes for 3,280 yards.

As with other teams interested in acquiring Jones, the San Francisco 49ers would likely have to wait until June 1. That’s when Atlanta can move off one of its greatest players in franchise history while saving money against the 2021 NFL salary cap.

Things are complicated for the 49ers in that Jones will count roughly $15 million against the cap in 2021. Right now, San Francisco is $17.1 million under the cap with multiple draft picks yet to sign, the aforementioned Lance included.

With that said, there’s avenues to create more cap room. Primarily, the 49ers could save nearly $24 million by trading or releasing Garoppolo. That would only happen if Shanahan and Co. are comfortable with Lance starting a rookie.

Either way, a skill-position group consisting of Julio Jones, Brandon Aiyuk, Deebo Samuel and George Kittle would be nearly impossible to stop. 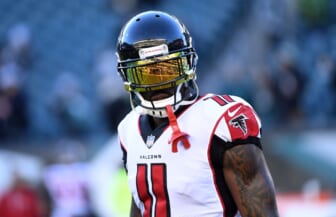 Despite Atlanta previously demanding a first-round pick in a trade, the going rate for Jones seems to be a second rounder and change. This is good news for San Francisco in that the team moved its first-round picks in 2022 and 2023 in a trade up for Lance earlier this spring.