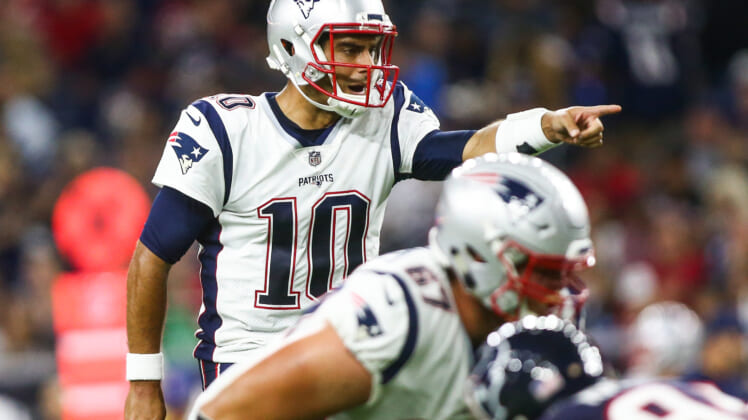 As quarterback Jimmy Garoppolo waits for an opportunity to prove himself with a new team, a decision he made in 2016 with the New England Patriots is being revisited. In the final stages of recovery from offseason shoulder surgery, Garoppolo’s former teammates are shedding light on what transpired in New England.

Selected with the 62nd pick in the 2014 NFL Draft, Garoppolo barely saw the field early in his Patriots’ career. It wasn’t until the NFL suspended Tom Brady as part of the Deflategate scandal that Belichick was forced to start the younger quarterback.

Things looked promising early as the starter. In his first two starts, Garoppolo posted a 4-0 TD-INT ratio with a 119 passer rating, a 71.2% completion rate and 496 passing yards. New England jumped out to a 2- record, seeing lots of promise from the inexperienced signal-caller.

In a Week 2 victory against the Miami Dolphins, Garoppolo suffered an AC joint sprain in his non-throwing shoulder. Backup quarterback Jacoby Brissett started the next game, leading the team to a win despite tearing ligaments in the thumb of his throwing hand.

Heading into Week 4 with an undefeated record, players saw Garoppolo on the practice field during the week. It left them with the impression that he would play that Sunday against the Buffalo Bills. Instead, Garoppolo was ruled inactive before the game and Brissett, a rookie at the time, struggled to play with the damage in his thumb.

Related: San Francisco 49ers will only keep Jimmy Garoppolo on one condition

Fast forward to October 2021, former Patriots tight end Martellus Bennett ripped Garoppolo for his actions. While he believes players have the right to protect their bodies and preserve their careers, he said Garoppolo was a ‘b—-‘ for bailing on the team at the last minute.

During a recent appearance on the I AM ATHLETE podcast, ex-Patriots star Julian Edelman said many teammates shared that sentiment towards Garoppolo.

Players understand that their peers often have to look out for their best interests, preserving their bodies for as long as possible in a violent game. Garoppolo’s agent wanted to look out for his client’s long-term health and financial future, but it came at a cost.

As Edelman further detailed, Garoppolo’s decision to back out on starting hours before the game was especially bothersome for those like Edelman who played through constant pain.

In the end, Garoppolo did what was right for him and it worked out. After being traded to the San Francisco 49ers, he signed a five-year contract extension worth $137.5 million. While he might not have the full support from some of his former teammates, he landed financial security for his family and that is even more important.